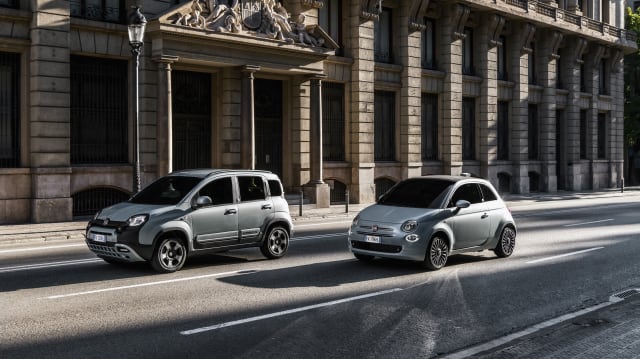 Fiat has confirmed pricing and specifications for upcoming mild-hybrid variants of its 500 and Panda superminis.

Under the bonnet of both cars is a new powertrain that links a three-cylinder 1.0-litre petrol engine with a 12-volt electric motor, with the latter working to improve efficiency by allowing the petrol unit to remain switched off for longer.

This new combination produces 69bhp and 92Nm of torque, sent to the front wheels via a six-speed manual gearbox. Fiat claims the 500 equipped with this new unit can achieve 53.3mpg on the WLTP Combined cycle while emitting 88g/km of CO2, while the Panda is said to be capable of 49.6mpg and 89g/km of CO2 respectively.

Though visually near-identical to regular versions of the 500 and Panda, each of these electrified models will be distinguished by a ‘Hybrid’ logo at the rear as well as a ‘H’ pattern made from a design of two drew drops in the centre console.

Both of the existing car’s core trim levels will remain in place at the introduction of the mild-hybrid powertrains, though these will be joined by a new Launch Edition model. This grade sees the introduction of seats made from a material called Seaqual Yarn, said to be created from recycled plastic.