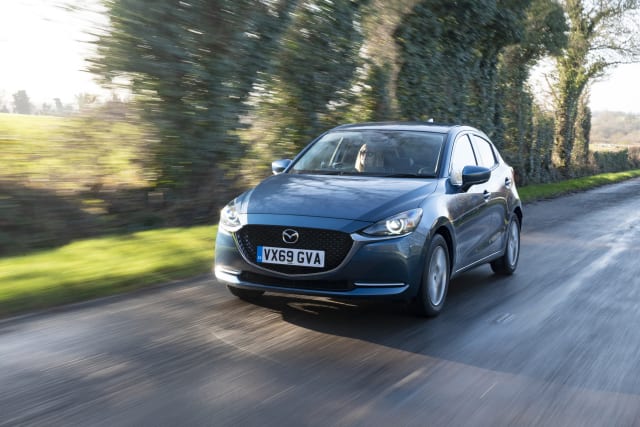 When it comes to the supermini market, there’s really no shortage of fresh-on-the-scene and appealing options. Ford’s latest Fiesta continues to rule the roost, while recently-introduced versions of the Vauxhall Corsa and Renault Clio have taken those respective nameplates to a new level — just to name a few.

An arguably forgotten amidst all of this is the Mazda 2. Having been on the market in its latest generation since 2014 with minimal changes at best, fresher competition has seen the Japanese hatch fall a little by the wayside in terms of recognition. Mazda is hoping to change that with a number of tweaks to the model for 2020, though…

Key to this raft of upgrades is Mazda’s ‘M Hybrid’ mild-hybrid technology, which makes its 2 debut. This makes use of energy generated from braking and stored in a capacitor by deploying it to allow the engine to switch off earlier when coming to a stop, theoretically reducing emissions.

Another mildly-changed element comes to its styling, where a few minor tweaks have been made to the 2 to give its exterior a breath of fresh air and a make it look a little more like the larger 3, while a chassis enhancement comes in the form of a torque-vectoring system aimed to improve driving fun. There’s some equipment upgrades too, though we’ll get to that later.

We’re driving the Mazda 2 in its most potent guise here, powered by a 1.5-litre naturally aspirated four-cylinder petrol unit that utilises the aforementioned mild-hybrid tech, to produce 89bhp and 146Nm of torque output. That power is sent to the front wheels via a six-speed manual gearbox, resulting in a 0-60mph time of 9.5 seconds before topping out at 114mph.

Mazda also claims an MPG return of 53.3mpg on the WLTP Combined cycle with CO2 emissions of 94g/km.

On paper, it doesn’t sound like particularly tantalising setup compared with modern rivals, particularly with its lack of a turbocharger, but the unit feels surprisingly brisk and has a lot of character to it. It’s well-refined too, while its manual gearbox is one of the crispest out there.

If there’s one thing the Mazda 2 never lacked, it was a characterful chassis. Fortunately, that remains the same story here, with the car offering plenty of play and manoeuvrability when needed while building on that with an everyday-suited package. It remains a touch shy of the fun that can be had in a Fiesta, but it certainly gives the Ford a run for its money.

Manoeuvrability is impressive thanks to well-judged steering, while strong visibility around the car adds an extra element of ease to the drive. If there are nitpicks to be made here, the ride lies a touch on the firm side, but it’s not detrimental to the overall experience.

Those who have seen a Mazda 2 in passing may struggle to pick this out as a new model immediately, but under closer scrutiny, there are key changes to the car’s design.

Up front, a tweaked chrome grille surround now slips underneath the headlights rather than directing to them as previous, while the light cluster itself has been remodelled with a circular LED headlamp taking pride and place. At the back, some very minor changes are made in a bid to give a lower look to the car.

With these changes, the Mazda 2 remains a pretty handsome looking thing. Sure, it looks a touch outdated when lined up with sharper rivals but it’s certainly nothing to turn your nose up at.

If changes are subtle on the outside of the Mazda 2, the same can’t be said for the interior. Though the layout remains largely the same, quality is much improved across the board.

Soft-touch materials have been introduced to a dashboard previously laden in plastic, while a much more modern-looking and feeling steering wheel has been swapped in. Even small changes like the climate controls and instrument cluster have brought a much more upmarket feel to the cabin.

It does, however, remain somewhat tight to sit in, particularly with other occupants in the car. As for boot space, it remains at 280 litres despite the addition of mild-hybrid technology — though that’s still down on the ever-conquering Ford Fiesta’s 292-litre capacity.

We’re behind the wheel of range-topping GT Sport Nav here, powered by the more-potent 89bhp powertrain option. This adds 16-inch alloy wheels to the car, keyless start, a reversing camera, heated leather seats, a head-up display (a rarity in this segment), a heated steering wheel plus some styling tweaks among other goodies. In the case of our test car, it will set you back £18,835 (including £540 optional paint).

Keep in mind a Ford Fiesta of a similar specification will require you to part with north of £19,000 and the Volkswagen Polo a similar price before options come into play, and it seems like excellent value for money. It may not be as cutting-edge as that pair, but it has them beat on kit-for-money.

Though the Mazda 2 may be getting on a bit in its current form, tweaks to the model have been enough to bring it up-to-scratch with rival offerings.

Mazda has built on the good areas — sharp dynamics and smart looks — by bringing a new level of value for money to the mix as well as seriously upping interior quality.

Drivers looking for a more spacious car may be left wanting for more and the ride is ever so slightly on the firm side, but there’s really not a whole lot to slate the 2 for here.