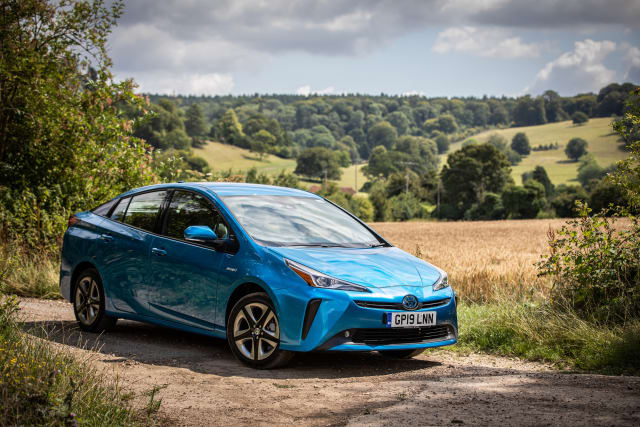 Not a day seems to go by without a further announcement of a new hybrid or EV, but one manufacturer that was truly ahead of the electrified curve was Toyota with its Prius.

Yes, while many scramble to bring these models to market amid changing consumer buying habits and tightening emissions regulations, Toyota was already there an impressive 20 years ago.

Known for its efficient petrol-electric powertrain, the Prius is a model that was truly ahead of its time. It’s also proven to be remarkably reliable – smothering any concerns from sceptics that hybrids aren’t built to last. Its low emissions continue to make it a big hit in urban areas, and to expand this appeal further, Toyota has introduced a new all-wheel-drive version, but is it worth choosing?

The key change on the latest Prius update is the introduction of all-wheel-drive, with an additional electric motor being located on the rear axle, meaning that power can now be sent to the back of the car rather than just the front. Toyota says it’s been deliberately engineered for the Prius, and that it’s the first model in its range with AWD, outside of the RAV4 – though we wouldn’t be so surprised if it made an appearance elsewhere.

As part of the update, Toyota has also tweaked the styling slightly – giving the Prius slimmer headlights, a revised front bumper and more horizontal rear LED lights, alongside a series of cabin edits.

Underpinning the Prius is a 1.8-litre Atkinson-cycle petrol engine that comes paired to two electric motors (one at each axle) and a battery. The additional electric motor on the rear axle enables all-wheel-drive, which automatically engages at speeds of up to 6mph to aid traction off the line. After this, it works at up to 44mph when sensors detect a loss of grip – enabling torque to be sent to the rear wheels. All this is automatically activated, too.

But where it scores majorly is in terms of efficiency, with the Prius known for its impeccable efficiency, and a lightweight all-wheel-drive system does little to diminish that. Toyota claims it’ll return up to 64.7mpg, and CO2 emissions of 85g/km, though if most of your driving is around town and if you have a gentle right foot, you’re likely to see even more impressive figures.

The Prius is a model that’s an enormous hit in cities such as London, and for good reason – there are few easier cars to drive. The steering is nice and light and it’s very comfortable too, with the model’s small wheels leading to a soft setup that deals with potholes well.

Just don’t head into a Toyota showroom expecting anything in the way of driver enjoyment from the Prius, as you’ll be sorely disappointed.

The Prius is certainly a distinctive model out on the road, but whether or not that’s a good thing, we’re not so sure. It’s refreshingly bold, though, with its split glass rear window and curved window line proving to be two unique cues that help it to stand out.

The slimmer bi-LED headlights are an interesting touch on this facelift, too, while the L-shaped rear lights help to separate this model from the pre-facelift.

The futuristic exterior look is also carried over to the cabin, with the Prius not coming with traditional dials, but rather a large display screen positioned in the centre of the dashboard.

It looks like it’s been lifted straight out of a sci-fi film, with a whole host of menus available to flick through and set depending on what you want to be displayed. Clever readings also display how the hybrid system is working, and also your fuel stats for those wanting to break their own efficiency records. Toyota has also updated its seven-inch touchscreen, though, with slightly outdated graphics and a lack of Android Auto and Apple CarPlay, it’s still one of the Prius’s weakest links.

It’s little surprise that the Prius has become such a hit with mini cabs, as the interior is spacious and practical, with rear space being very generous. All-wheel-drive does slightly eat into boot space, though – shaving 45 litres off the regular model’s 457-litre boot.

By opting for all-wheel-drive, you’re limited to having the Prius just in mid-spec Business Edition+ trim, which costs from £28,970. While that’s still good value for money, it’s a sizeable £1,650 more than a front-wheel-drive Prius, so you need to think carefully about whether you need that extra traction to justify this price.

Standard equipment is truly excellent, though, with this model getting LED lighting, a reversing camera, a head-up display and JBL sound system, to name just a few features. On top of the previously mentioned safety kit, this version also brings blind-spot monitoring and rear cross-traffic alert, which can spot hazards when reversing out of a parking space.

All-wheel-drive is an interesting addition to the Prius line-up, and, in typical Toyota fashion, it has been thoughtfully implemented in a way that has little impact on either efficiency or practicality.

Just how often you would reap the benefits of the system, though, is all down to where you live and where you drive. If you have a steep drive or live in a remote village, for example, it’s likely to come in useful in challenging conditions.

But if you live in a city and rarely drive outside of there, there’s next to no point in spending £1,650 to have it – the regular Prius is already excellent on its own accord and will be marginally more efficient without it.