Long-term report: The Suzuki Swift Attitude shows how much character it has 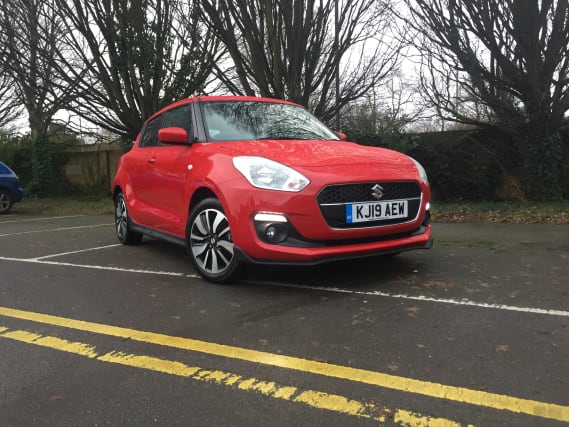 What would be the best kind of car to drive during the depths of a great British winter? Something nice and high-riding perhaps? Maybe with 4×4 capability and ready for anything the coldest months of the year could throw at it?

That’s exactly what I had in mind when I had to say goodbye to my previous long-term loan car, a Ford Focus Vignale, a few weeks ago.

In its place, I was given the keys to a rather smaller member of the fleet – a Suzuki Swift Attitude – perhaps not a model that would be many people’s first choice for tackling treacherous conditions.

At this point, you might be expecting me to say how disappointed I was – but that was far from the case. For a start, it looks as though winter on the South Coast could be a wet and windy one, rather than snowy and icy, and the car will easily be able to cope.

The other point is that the days of ferrying my kids around are long gone now they’re both approaching 30 and have flown the nest for the last time.

Therefore, 95 per cent of journeys I undertake are solo trips and I knew the compact Swift would be ideal for this and deliver excellent levels of comfort and fuel economy at the same time.

So after initially being very happy at being allocated the car, how do I feel three or four weeks later?

The answer to that question is – pretty pleased. It’s just the ticket and meets my needs perfectly. As a little reminder of its key statistics, the car is equipped with a 1.2-litre Dualjet petrol engine that’s paired to a five-speed manual gearbox.

It’s a sporty-looking little thing, with 16-inch polished alloy wheels, a rear spoiler, black A and B pillars (in contrast to its Fervent Red paint job), a mesh front grille with chrome trim and body-coloured outside door handles.

Inside, there are plenty of creature comforts and the cabin is a pleasant place to be. The in-car entertainment is easy to operate and navigate but I’d mention one tiny gripe here. I quite often drive with the radio switched off. However, exiting the car to grab a coffee on the way to work, I jump back in to find the radio always very much on, despite the fact I haven’t touched any of the controls. File under first-world problems though, I guess.

So far, my time with KJ19 AEW has largely been spent doing the 20-mile round trip to the office which hasn’t exactly put the car through its paces too rigorously but occasional trips to London from our base in Gosport have given it a bit more of a workout.

Of course, the Swift’s modest dimensions make it ideal for driving in our congested capital. It’s great for making quick getaways at junctions and can squeeze into the tiniest of spaces when it comes to parking up for a few hours. The rear-view camera is a feature that really comes into its own in such circumstances.

I hesitate to mention the festive season as it’s now so long ago – but KJ19AEW easily accommodated a 6ft Christmas tree in the run-up to the big day, and although I have mentioned that I tend to travel by myself most of the time, I still do provide the odd lift here and there and accommodating four other adults in the Swift was no problem at all, although you might not want to embark on a particularly long journey with five on board. (Plenty of legroom but a little bit of road noise was the verdict from those in the back.)

All in all then, life is good – and frugal – with our Suzuki Swift and I’ll definitely be doing my best to hang on to the keys. In a crowded small car market, it’s definitely worth checking out and with Suzuki’s reputation for quality and reliability – and undoubted expertise when it comes to manufacturing small cars – it could prove to be a very good buy.