First Drive: The Ford Puma makes a case for itself at the top of the crossover segment 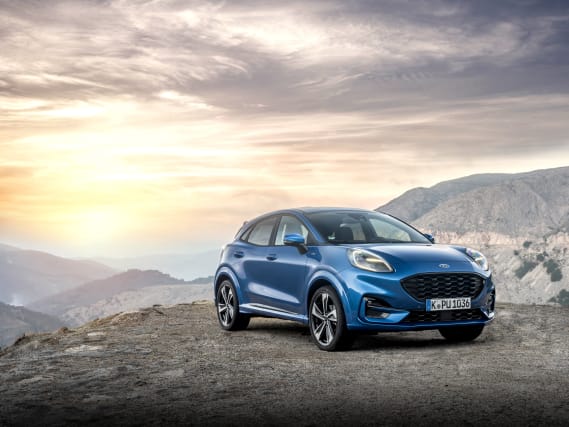 For many, the Ford Puma is a compact sports car that was an affordable coupe in the 90s. But with crossovers now dominating the market, the American firm has decided to repurpose the name on a new compact model with SUV styling.

This Puma shares a lot with the latest Fiesta, but now comes with an all-new look that sets it apart from most other Fords. It joins the Kuga, Edge and Ecosport in the SUV/crossover line-up for the American brand in the UK, but can this new option be as successful as its larger siblings? We went to Málaga to find out…

Although the name isn’t new, pretty much all of this car is. Unlike the supermini it’s based on, the Puma will be offered with mild-hybrid powertrains from launch – with the Fiesta receiving one later this year.

As well as that, there are segment-first features, such as the option of a hands-free tailgate and massage seats. The Puma also gets a series of sensors, radars and cameras to facilitate Ford’s range of Co-Pilot360 driver assists.

The new Local Hazard Information system is also included in the Ford Connect service, which warns drivers of any disruptions and hazards along their journey. But we also have to mention the innovative storage solutions, with an 80-litre box integrated under the boot floor, which comes with a removable plug so you can wash items and let the water out afterwards.

On the Puma launch event, we exclusively tested the new mild-hybrid petrol systems, which are based on the 1.0-litre, three-cylinder EcoBoost petrol engine. Paired to a 48V battery setup, customers have the option of 123bhp and 153bhp outputs – and we’ll be focusing on the latter.

Even with the electrical support, the engine remains very characterful, with it happy to rev well over 3,000rpm and pull you along nicely. But when you decide to settle down into a cruise, it feels smooth and doesn’t make a lot of noise. The six-speed manual gearbox can be notchy at times, but on the whole, it’s a smooth partner for the powertrain. A seven-speed automatic is joining the line-up later this year, though.

The electrical assistance will also make a big difference in terms of fuel usage. Ford says these units will come with cylinder deactivation to help reduce your fuel bill and it claims figures of 51.3mpg and 126g/km CO2 – not bad for a small crossover. But creating a potential dilemma for customers is the fact a diesel unit is on the way, which is set to be even kinder on your wallet than the top-end petrol mild-hybrid.

To contextualise our driving impressions, we tried the Puma on smooth Spanish roads, and it handled them superbly. With the larger alloys on our ST-Line X model, we didn’t feel too many bumps in the road being transferred into the cabin and it felt settled almost everywhere. There is a lack of feel through the steering wheel and it isn’t the most engaging car in the world, but it certainly isn’t a bad car to drive.

Saying that, understeer only started to kick in when it was pushed, and even though it’s a larger vehicle than the Fiesta overall, body roll was handled just as excellently thanks to the sports-tuned suspension. We also have to say that even though there were Eco and Sport drive modes – as well as Trail and Slippery options – there was only a small difference between them, so you’re better off leaving it in Normal.

Ford has said that the Puma comes with a more laidback approach to design, and you can see where it’s coming from. The ‘anti-wedge’ design has a flat line stretching from the headlight to the rear to complement the sloping coupe-like roof – drawn from the previous Puma.

The headlights come with a design inspired by the GT supercar, and they certainly help the Puma stand out. To enhance that, Ford has given the crossover flared wheelarches, while the sporty ST-Line X model we tested came with some stylish 19-inch alloys that complemented the look of the Puma very well.

With its base a rather practical supermini, the Puma has been extended further by Ford, with a longer wheelbase and higher body making for more interior space. Even the tallest drivers in the front will find the head room to be more than ample, while the large windscreen helps the cabin feel airy. The visibility could be improved, but it’s to be expected with the coupe-like styling.

There’s actually a lot of innovation in terms of storage on the Puma. Under the moveable boot floor is a unique 80-litre compartment that has a plug in the bottom to let water out. That extends the Puma’s boot space to 456 litres, which is a class-leading figure by a significant margin, and the opening is squared-off to make it easier to put things in and take them out. The parcel shelf is also attached to the boot lid instead of behind the seats, which Ford says allows for more practicality.

For additional comfort and style, the Puma also came with the Driver Assistance, Design, and Winter packs, which took the overall price of the vehicle close to £27,000 – a fairly sizeable amount for a car of this size and quality.

Although the market wasn’t calling out for another crossover, Ford has managed to put itself towards the forefront of the compact end of the segment. The Puma is practical, comfortable and on the whole, good to drive.

The mild-hybrid setup, which Ford expects to be popular with UK drivers, is a good step in the right direction towards electrification – but we would like to see this car with a plug-in option of some sort. However, as it currently stands, the Puma is a great option as a small family car, and could become even better.