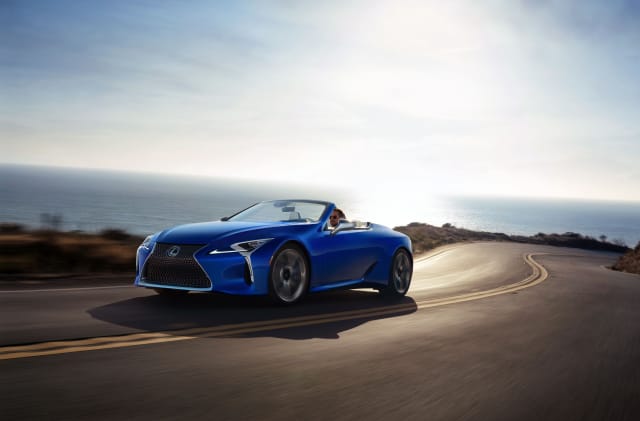 An eager fan of the upcoming Lexus LC500 Convertible could be the first owner of the vehicle before official sales begin, with the firm putting a one-of-one example up for charity auction.

Set to go under the hammer at the Barrett-Jackson auction in Arizona, USA, on January 17, this LC500 Convertible is the first to roll off the line.

Based on the special-edition Inspiration Series variant of the LC, this particular car boasts a ‘Structural Blue’ paint finish and a white leather interior. Unique to this model are blue brake calipers sat behind 21-inch ‘Liquid Graphite’ forged alloy wheels with contrasting gloss black accents.

Marking out this LC500 Convertible’s status is a set of carbon fibre scuff plates on the door sills with ‘LC Inspiration Series Launch Exclusive 1 of 1’ imprinted on each.

Mechanical elements of the car remain identical to that which will be entering full production later in 2020 — albeit in US-specification. This means it’s powered by a 5.0-litre, naturally-aspirated V8 engine sending 471bhp and 540Nm of torque to its rear wheels.

Along with the car, the winning bidder will receive a host of goodies to match. These include a framed sketch of the LC Convertible, a photo album containing images of the car in production and a certificate signed by engineers of the car as well as the general manager of the factory in Motomachi, Japan, where the LC is produced.

No reserve has been set for the auction, though expect its price to be a meteoric rise over its regular list pricing — likely to be a premium over the coupe’s £78,150 starting cost.