Long-term report: Does our Mazda 3 Skyactiv-X prove to be pleasantly efficient? 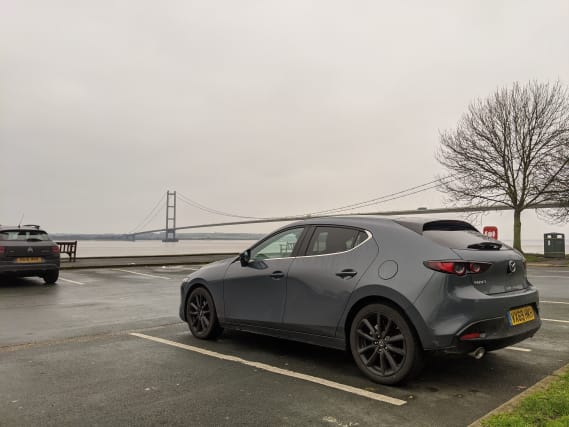 When Mazda announced its Skyactiv-X technology a couple of years back, it came with a big promise — diesel efficiency and low-end performance on cleaner petrol fuel. It was a tantalising thought, but surely not something that would translate into the real world as well as marketing, right?

With the arrival of our long-term Mazda 3, that was something I was keen to try out myself. What better time to test out efficiency than Christmas, right?

My trip home to Hull from our Gosport office is approximately 270 miles and, though far from exciting, often proves a strong test of a car’s long-distance efficiency, compromising almost entirely of motorway driving.

For our 3, Mazda claims it’s possible to hit 48mpg on the WLTP Combined cycle. Driving up North, I managed to achieve a pretty decent 49mpg over the course of the trip with a fully loaded boot — a plus point for the tech immediately.

Beyond just sheer efficiency though, I was surprised by the refinement of the 3. Though it certainly sounds rather gruff when at an idle, it’s practically silent when travelling along at motorway speeds.

So, the Skyactiv-X 3 proves impressive on a longer run, but what about in town?

My first take-home point from more urban-oriented driving is that the 3 requires a bit of recalibration of how to make the most of an engine. It certainly behaves like a diesel engine would — delivering strong low-end punch — which often means you’ll find yourself shifting at 1,500-2,000rpm out of habit.

This means the 3 is often left feeling rather sluggish. Wring the revs out a bit, and it makes strong progress higher up, though I found that requires a real element of concentration to do. Not a big deal if you’re hanging around town, though for some fun out on more open roads it’s something to keep in mind.

What has left me a little bit disappointed though is the drop-off in efficiency when sticking to city streets. Within a day of arriving in Hull, my average MPG had dropped from 50mpg to 42mpg — despite only having covered 30ish miles of urban driving in that time.

That may prove to be better than the lower-output Skyactiv-G unit, but with a £1,580 premium, the cost of ownership may not prove to be all that cheaper if you’re sticking to town. Therefore, the X is probably only the better option if you need the extra performance or spend most of your time on motorways.

One final gripe I’ve noticed over the Christmas period is with the 3’s digital instrument cluster. It works fine, though discoloured lines have begun to appear across the unit on start-up and appear to show no sign of fading. Hopefully, a trip to a Mazda dealership should see this fixed under warranty, but that’s a phone call yet to be made and one I’ll report back on.

Otherwise, things have been pretty plain sailing with VX69 HKH. Its boot swallowed all my cargo for the trip up North with no major issues, and its adaptive cruise control proved faultless for the 270-odd mile journey.

It served well for the Christmas day transport of my nan, who complimented its plush ride and “fancy screen”, and made easy work of what tends to be a stressful time of year. Efficiency did drop to around 48mpg on the trip south, though that remains rather respectable for a non-turbocharged petrol car in my books.

Now back down South with the Mazda 3, I’m keen to spend a little more time with it, as my initial impressions are that it’s something that could be a real Ford Focus challenger. Time will tell for sure, though.