UK Drive: The Porsche 718 Boxster T could be the ultimate driver’s drop-top 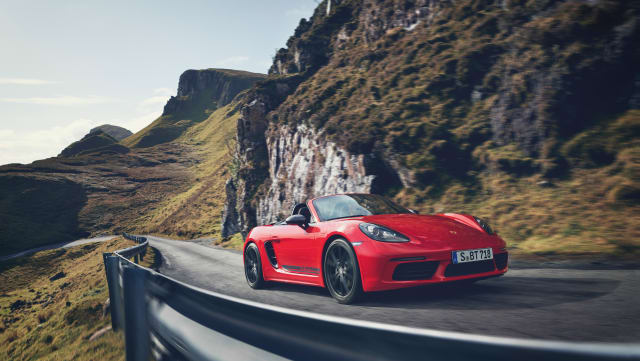 This is the 718 Boxster T, a pared-back driver-focused version of Porsche’s convertible sports car. The T stands for Touring, and first made its return to the German firm’s range on 2018’s 911 Carrera T, expanding the enticing recipe of stripping back fripperies in favour of some cherry-picked dynamic options.

Although the Boxster has more of an image as the poser’s choice compared with its 718 Cayman cousin, it’s always been an utter gem to drive. Therefore, these enhancements give an already-excellent base an extra sprinkling of genius – with the Boxster now closer to the Cayman than ever, could this convertible be the do-it-all pick of the 718 bunch?

To be frank, there’s not a whole lot that’s new, with the T representing something of an option box greatest hits album for keen drivers. The Touring package takes an entry level Boxster, removes a few luxuries in the name of weight saving, then loads up on performance-focused equipment.

The radio and infotainment system, for example, isn’t included as standard – but it’s free to add back in so anyone using their Boxster T with any sort of regularity should do so. The novelty of silence on a long road trip will likely wear off quickly. Then there’s the interior door handles that have been replaced with fabric loops, a weight saving likely written off should you eat a sandwich before driving.

Performance comes from the same 2.0-litre flat-four-cylinder engine found in the base Boxster, outputting 296bhp and 380Nm of torque, with a 171mph top speed and 0-60mph time of less than five seconds.

In the standard Boxster, the engine can feel rather gruff for what is supposed to be a smooth and elegant sports car – enthusiasts lament the loss of the previous generation’s silky smooth six-cylinder unit, which had the refinement you’d expect of such a car. However, here, with a focus on performance, its brawny sound and aggressive charge through the revs feels more at home.

The first thing you’ll notice as you nestle into the small cabin is that there are three pedals and a curious stick by your left hand. Yes, Porsche is sticking to its guns to cater to enthusiasts who want to feel more at one with their motor – and boy, is this one of the best manuals out there.

The shift action is a joy to use and the clutch pedal is perfectly weighted, so you quickly gel with the car and feel like you can get the most out of the sublime chassis. It doesn’t feel ludicrously fast, but when the suspension soaks up all but the worst road imperfections and the steering is sharp and responsive to inputs, it’s hard to find fault.

Naturally, it’s not perfect, and the main criticism is one that’s been levied at these models before. The gear ratios are too long, and while that makes sense on the Cayman because buyers often use them on track, here it’s just frustrating, because you can achieve license-losing speeds at the top of second gear. You therefore rarely get to use that glorious shifter during spirited driving, as most roads can be dealt with in third.

There’s a real elegance to Porsche’s 718 models, with a sense that there’s no unnecessary body work, just svelte lines draped over the essentials. With models from all manufacturers facing criticisms for fattening up to meet safety regulations, the Boxster has retained its pretty proportions.

T models do get a few standout features, such as 20-inch alloy wheels in titanium grey, door decals displaying the model name, and black, chrome-plated twin tailpipes that are mounted centrally.

The Boxster might be small inside but it doesn’t feel too cramped. Sure, those used to larger models might find it a little claustrophobic at first, but once you’re settled in everything falls to hand easily – ergonomics is a Porsche specialty.

Don’t expect to find a fussy, button-festooned interior either – there are a few buttons for driver aids and the like, climate controls, and the infotainment system if you’ve put it back in, but otherwise there’s a real simplicity to the cabin. Coupled with some excellent materials and it feels like it leans towards deliberate minimalism rather than simply being spartan.

The focus on equipment here relates to performance, with a plethora of upgrades making the Boxster T feel like pretty good value, considering it would cost a few grand more to specify them separately.

The Boxster T gets the Sport Chrono Package, which adds drive modes and other performance improvements, a sport chassis that lowers the car by 20mm, a torque vectoring system with a limited-slip differential, and 20-inch alloy wheels instead of 18-inch units.

If you’re under the impression that convertible sports cars are for posing and fixed-roof coupes are for serious drivers, the Porsche 718 Boxster T is here to shatter those preconceptions. Sharing a platform with the Cayman certainly helps, but there’s absolutely no slack or compromise over its relation.

If you’re looking for a drop-top that’s seriously capable on a blast across the countryside the Boxster T should be the first car on your shopping list.