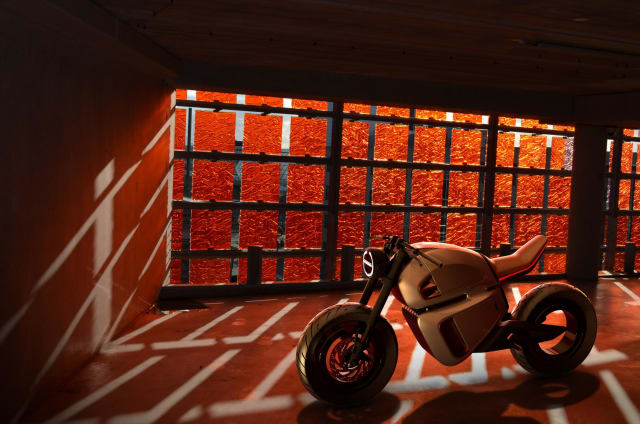 The company creates fast energy storage systems and has applied this knowledge to a two-wheeled format. The Racer uses a next-generation ‘hybrid’ battery – a first in electric powertrains – which can offer ten times more power and five times more energy than ‘traditional’ battery setups.

It uses a hybrid ultracapacitor battery to improve efficiency, as well as driving down charging times and extending the system’s life overall. Energy is stored in an 8kWh battery, which is around half the size of a conventional e-bike’s battery.

Both front and rear lights are LED units, while the bike’s undercover looks are enhanced by matte black anodised front forks. A nubuck leather saddle has also been fitted.

NAWA says that the Racer should go from 0-60mph in under three seconds and top out at speeds ‘in excess of 160kmh (99mph)’. This acceleration is thanks to both the powerful hybrid unit and also the bike’s low weight – which is achieved through the use of carbon fibre for the frame, and composite materials for the body panels. In all, the Racer comes in it just 150kg.

The Racer should also be able to travel more than 93 miles on a single charge, making it an ideal choice for urban riders or those who undertake shorter journeys.

Though just a concept for now, NAWA says that its hybrid battery system could be applied to any type of electric vehicle and could enter production soon.