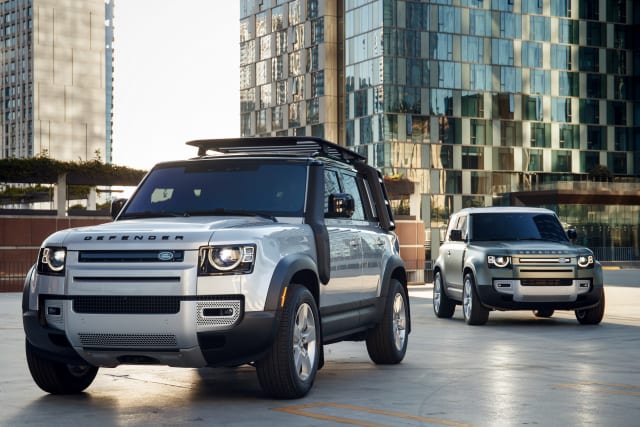 The all-new Land Rover Defender’s cutting-edge connectivity functions have been shown off at this year’s CES show in Las Vegas.

The off-roader, which was first revealed last year, incorporates a first for the automotive industry – dual-eSIM, dual modem connectivity which allows for seamless over-the-air updates which can be completed without interrupting the streaming of music or apps through the car’s infotainment.

Thanks to a back-up battery the system remains always on and is paired to a brand-new 10-inch Pivi Pro touchscreen display in the centre of the cabin.

It utilises much of the same technology as you’ll find in a current smartphone, including two Qualcomm Snapdragon 820Am processors. The system can also connect to two Bluetooth devices simultaneously. The infotainment itself uses Blackberry’s QNX operating system, and it’s also used on the digital display which sits ahead of the driver.

Land Rover has also partnered with Bosch to develop a new 3D surround-view camera system. A series of 190-degree wide-view cameras and 14 ultrasonic sensors give the driver the option to view different areas of the car when positioning it.

Peter Virk, director of connected car and future technology, Jaguar Land Rover, said: “With one LTE modem and eSIM dedicated to the Software-Over-The-Air (SOTA) technology and the same set-up looking after music streaming and apps, New Defender has the digital capacity to keep customers connected, updated and entertained at all times anywhere in the world.

“You could liken the design to a brain, with each half enjoying its own connection for unrivalled and uninterrupted service. Like the brain, one side of the system looks after logical functions, like SOTA, while the other takes care of more creative tasks.”