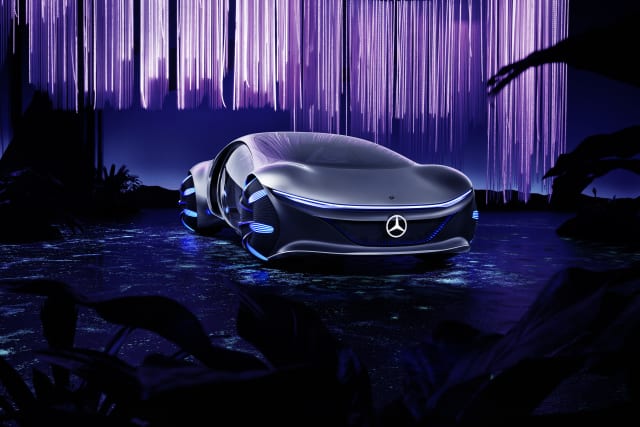 Mercedes-Benz has unveiled a car inspired by the movie Avatar – the Vision AVTR.

Designed to show a ‘completely new interaction between human, machine and nature’, the concept features a distinctive design which is applied to both the interior and exterior of the vehicle.

Instead of a conventional steering wheel, the Vision AVTR gets a ‘multifunctional control element’ located in the centre console which allows human and machine to ‘merge’. The system can recognise when the driver places their hand on the control unit, and instantly kicks into life by recognising their heartbeat.

Then, a menu selection is projected on the hand of the owner, from where they can select a variety of different functions.

The concept is all-electric, utilising a motor located on each wheel. Mercedes claims that it’ll travel up to 434 miles on a single charge.

Mercedes-Benz also states that the concept uses a new type of battery based on graphene-based organic cell chemistry that is ‘completely free of rare earths and metals’. The materials that the battery uses are compostable and completely recyclable as a result.

It also features 33 ‘bionic flaps’ on the back of the vehicle which, Mercedes says, are reminiscent of reptile scales. The German manufacturer also says that because the Vision AVTR can drive the front and rear axles in the same or opposite direction, the car can move sideways by approximately 30 degrees.

Inside, the car has been finished in vegan leather, while the floor is covered in a new type of wood called Karuun. Harvested by hand in Indonesia, it’s a fast-growing and sustainable material for car building.

Of course, this is just a concept for now – and there are no plans for it to enter production just yet.