UK Drive: The BMW Z4 M40i is a soft-top with added edge 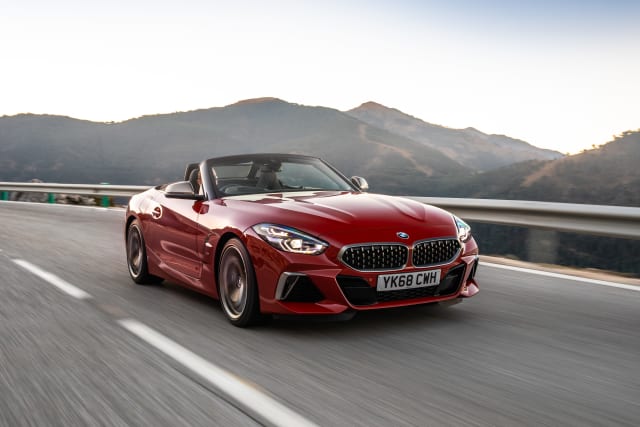 BMW’s Z4 has, traditionally, been a roadster which has sat on the softer side of things. Sure, we’ve had the mad-hatter Z4M, and a range of straight-six powered variants, but it’s never been the go-to option for those looking for a roadster with a sharper edge.

That’s where this latest Z4 M40i chimes in. Aiming squarely at the Porsche 718 Boxster, this latest Z4 is harder, sharper and – thanks to a turbocharged 3.0-litre straight-six engine – more powerful than ever. And though we’ve tested it overseas before, this is our first opportunity to get behind the wheel here in the UK. The question is, what’s it like? We’ve gone to find out.

One of the biggest changes over the old Z4 is the use of a fabric roof over the older car’s folding metal version, which not only brings weight down but lowers the centre of gravity too. The wheelbase is shorter while the track is wider, both of which alleviate the Z4 to a far more sporting alias than the car it replaces. Good news, then, to those who want a more agile Z4.

There’s also M-developed brakes on all four corners, and an electronic differential at the rear. Exterior-wise, the M40i is muscular and wide at the rear while a large diffuser dominates the rear of the car. It’s an eye-catching design, that’s for sure.

Under the front of the Z4 lies a 3.0-litre, straight-six turbo engine with 335bhp and 500Nm. It’s an engine which laughs in the face of the current trend for downsizing, with only the five-cylinder turbo in Audi’s TTRS coming close in capacity. It’s a punchy engine – and one shared with the Toyota Supra and Morgan Plus Six – and has enough power to get the Z4 from 0-60mph in just 4.3 seconds and onwards to a 155mph limited top speed.

The drivetrain is simple enough. Power is sent to the rear wheels through an eight-speed ZF automatic gearbox, giving the traditional BMW setup that buyers and drivers love. Efficiency-wise, BMW claims that the Z4 will return up to 38.7mpg while emitting 165g/km CO2.

That softness of the old car has been successfully and comprehensively eradicated with this latest Z4. There’s an inherent stiffness which is quite noticeable, and over rutted surfaces there’s a significant amount of jostle which is noticeable in the cabin.

But boy, is it quick. It feels distinctly turbocharged, with plenty of mid-range punch, but even from the get-go the straight-six feels strong and linear. It isn’t the most exciting-sounding of engines, but it’ll be dramatic enough for most.

And it’s at those higher speeds where the suspension comes into its own. It keeps the car composed, with little flex coming as a result of that lopped-off roof. The steering too is accurate and quite weighty – a little overly so in performance ‘Sport Plus’ driving mode, in fact.

The Z4 was one of the first cars to take on BMW’s latest design language, and we’d argue that it’s been one of the most successful to do so. The front grille, larger and more pronounced than ever before, is more in-keeping with the overall proportions of the car. Compared to the likes of the X7 or X6 – which both feature gargantuan nostrils – it looks positively conservative.

Move around the car and there are small touches to pick out, notice and inspect. It’s a good-looking car both in pictures and in the metal too. The driver is more centrally positioned than they were in the older car and though that does mean that this latest Z4 doesn’t have quite as much of a pronounced bonnet, it’s still got plenty of that old-school roadster appearance.

Drop into the drivers’ seat and it’s immediately noticeable that the cabin has been orientated around whoever is behind the wheel. All of the main controls, buttons and dials are directed to the driver and this gives you good access to all of the major functions. The central display is still controllable via the rotary controller by the switchgear, but it’s backed up by touchscreen functionality – though it’s placed a little too far away to make use of fully with your fingers.

The dials ahead of the driver – as we’ve said before – are too fussy and too complicated. BMW used to knock it out of the park when it came to clear, concise and easy-to-read displays but this latest setup feels like a step backwards instead.

The M40i, sitting at the top of the Z4 range, gets all of the bells and whistles you could want. Electric seats come in as standard, along with 19-inch wheels and a leather-trimmed steering wheel to name but a few. M Sport cars get sportier suspension, too, and there’s Apple Car Play included inside as well.

It works well on the Z4 and makes a great option for those who would rather mirror their smartphone interface rather than use the car’s standard system.

This most powerful Z4 is a fitting variant to sit atop the range of soft-tops. It’s more than powerful for most, more accurate than before and more rewarding to drive. It’s a touch cold, we’ll admit, and the exhaust note isn’t the most exciting, but as an instrument it’s immensely impressive.

Throw in the ability to lower or raise the roof in just 10 seconds and you’ve got a package built to put a grin on your face regardless of the weather. It can’t quite match the sharpness of the Porsche, but it comes perilously close – and few will regret their decision to take the keys to the BMW.