UK Drive: Go-faster Audi A1 S line Competition is an appealing prospect – if you can stomach the price 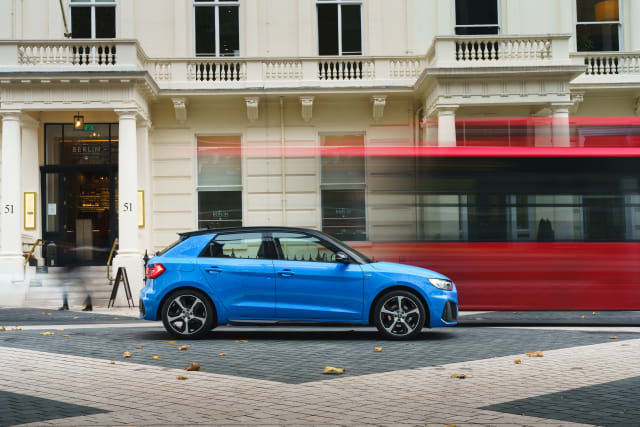 The A1 has been quite the hit for Audi, providing the least expensive entry point to the premium brand’s range as well as an option for city dwellers who want something small without sacrificing badge appeal.

For the most part, it’s available with small and economical engines designed to keep running costs low. However, nestled in the line-up is the S line Competition trim, which boasts a large-for-the-segment 2.0-litre engine with a power output that matches the current hot supermini of choice, the Ford Fiesta ST.

However, unlike the Ford, the Audi doesn’t have much in the way of performance upgrades to tame that grunt – will this make it a fun diamond in the rough, or an unruly mess? We had to find out…

This being the updated A1, the Competition gets the same general improvements seen across the range, including that much more aggressive and sporty-looking styling, which is amplified slightly in this trim. It’s also slightly longer, which has helped increase cabin space, while the boot capacity has increased 65 litres to 335.

Audi has gone some way to acknowledge that this is a go-faster model, fitting sport suspension with adjustable dampers and drive modes, twin tailpipes… and painting the brake calipers red, the sure sign of a go-faster model.

The engine’s a familiar one for VW Group cars. It’s from the ubiquitous EA888 family of engines, here in 2.0-litre, 197bhp form, making the Audi A1 S line Competition something of a Volkswagen Polo GTI twin.

For a supermini to have that much power is enticing, and the 6.3-second 0-60mph time and 146mph top speed prove there’s certainly brisk performance on offer. Here it’s exclusively mated to a six-speed automatic transmission, which is keen to indulge your full throttle mischief making.

The best way to describe the driving experience is: a handful. With 197bhp going through the front wheels and only software that uses the brakes to tame wheelspin – the Fiesta ST has an optional limited-slip differential, which works wonders – the front end does like to tug and pull.

However, once you’re used to its fairly yobbish characteristics when pushing on, the A1’s small dimensions, light weight and punchy engine combine to make for a genuinely quick cross-country steer.

It’s distinctly lacking in character, with the considerably less expensive ST providing much more driver involvement. The trade-off, though, is that the Audi settles into everyday driving duties much more smoothly.

The A1 might be the baby Audi but it makes up for it with brawny looks. While the previous-generation car had a softer appearance, the new one looks like it’s trying to dress up like the firm’s RS models – even in lower trims. This is largely achieved through the three bonnet slits that pay homage to the Audi Sport Quattro rally icon of the Eighties, a design feature that’s also on the R8 supercar.

The S line Competition gets some unique styling points to give it a sporty edge, such as the grey door mirrors and vanes in the front bumper to further mimic the styling cues of RS models, as well as 17-inch alloy wheels, red brake calipers and S badging inside.

Our car was wearing Turbo Blue paint, which is a bright and eye-catching shade that works brilliantly with the extrovert styling of the A1.

As we’ve come to expect from Audi, the A1’s interior is one of the best in its class. Most of the materials are good quality, and there’s plenty of technology on board – just because this is the smallest Audi doesn’t mean it misses out in that department. With the responsive central screen controlling most functions and the excellent digital instrument binnacle, the A1 feels fully up to date.

Taller drivers might find the driving position somewhat cramped, but generally speaking the A1 doesn’t feel too claustrophobic inside.

You also get the digital cockpit included, as well as Audi’s smartphone interface, DAB digital radio, and air conditioning.

Those looking to splash the cash to get even more creature comforts can opt for the £1,695 Technology Pack, which adds satellite navigation, an upgraded digital cockpit and wireless phone charging; a £1,150 Comfort and Sound Pack, which brings a Bang & Olufsen sound system, upgraded parking aids and heated front seats; and a £695 Plus Pack, with dual-zone climate control, tinted windows and a front centre armrest. All feature sought-after equipment, but ticking these three boxes brings you perilously close to a £30,000 Audi A1…

The Audi A1 S line Competition offers a compelling option in the hot supermini segment. Unlike the cheaper Polo GTI and Fiesta ST, it’s not ostensibly a performance model – and it shows in the lack of driver involvement.

It’s quick, though, and would be the best of the three to live with, offering excellent refinement, decent equipment levels and plenty of badge appeal. Spending circa £25k on a supermini is borderline obscene – ticking options which push it closer to £30k even more so – but if that’s not off-putting, this high-spec A1 is an appealing prospect.