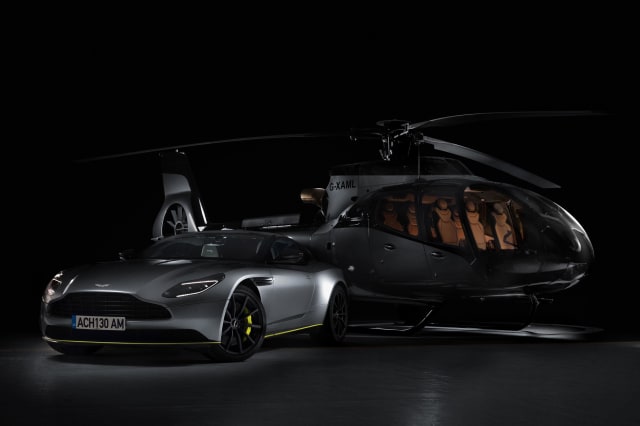 Essentially an edited and re-trimmed version of the Airbus ACH130 – the firm’s single-rotor helicopter – the ACH130 Aston Martin Edition receives a variety of touches which take inspiration from the Aston Martin’s range of cars.

The exterior panelling can be finished in one of four Aston Martin colours – Xenon Grey, Arizona Blue, Ultramarine Black and Stirling Green – while a unique serial number with Aston Martin Lagonda’s initials has been stamped on the rotor cowling of each model.

Marek Reichman, Aston Martin vice president and chief creative officer, said: “We have our own set of automotive design principles but in recent years we have been learning how to apply our principles to other areas of design, such as architecture, motorcycles and now helicopters.

“This first application of our design practices to a helicopter posed a number of interesting challenges but we have enjoyed working through them. Beauty is of vital importance to Aston Martin and to our customers and we think the ACH130 Aston Martin Edition is an inherently beautiful machine. It provided a wonderful canvas for our team to work on so we now look forward to seeing everybody’s reaction.”

In order to comply with air safety regulations components such as the seat frames, safety harnesses and main controls are identical to those found on the standard ACH130, but Aston Martin has been allowed free reign over the more aesthetic areas of the cockpit.

Large areas of the cabin have been trimmed in the same blend of carpet, leather and microsuede as you’d find on the Valkyrie hypercar, while the front row seatbacks get the same carbon fibre effect as on the DB11.

A unique set of leather saddle bags area included too, and a unique plaque has been added to the helicopter’s instrument panel as well.

Prices for the AH130 Aston Martin Edition are available on application, but expect them to be somewhat higher than the £2.4 million commanded by the standard Airbus version.