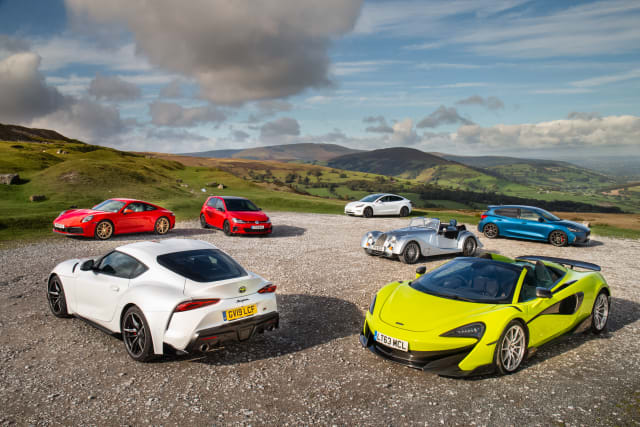 Wet weather gear well and truly wrung out, we decamp to a nearby pub for a Thursday night chat and to warm our toes. The year’s RTOTY has pitched the new world order versus the traditionalists, hot hatches against supercars, but even sitting around the pub table we can’t agree on a winner.

I’m a huge fan of the Tesla – as you’ve already read – and it top-scores in my judging table. But that doesn’t matter here. Jack, Darren, Jon and I spend far too long poring over our notes and translating opinions to award scores out of 10 in nine key categories.

It’s up to the tester what constitutes a 10. Darren and I are pretty generous with our scoring, both of us handing out the maximum in a number of categories for different cars.

Jack and Jon are far tighter, giving one 10-point score alone each. I then crunch them together in a master table to work out our overall winner.

The Morgan scores a flat last place out of the seven cars – despite Jack’s best attempts to push it further up the chart. It’s not great to drive, crashes over the merest pebbles in the road, the roof leaks and the doors don’t shut properly. Couple that with mirrors that are impossible to see out of and a tech system that appears to have used the internals of a Casio watch and it becomes hard to describe its faults as ‘character’. The engine is the best bit – and that’s not even Morgan’s. Yes, it might be interesting to look at, but that’s about all it’s got going for it.

Sixth place goes to the Golf TCR. £38k is a ridiculous amount of money for a Golf, no matter how good it is to drive. It scores highly in the practicality and comfort stakes but gets the lowest marks for styling. I enjoyed driving it, but it never set my world alight – I simply couldn’t get over the fact it was a very expensive hatchback.

In fifth place – and one I’m incredibly surprised at – is the Porsche 911. It’s beautiful to look at, has some jewel-like details and is rapid.

I love the sound, the steering, the technology and above all else the styling. Colleagues labelled it as ‘boring’, with Darren saying it ‘simply doesn’t do anything for me’. I’d say that’ll come with time for them, and by time I mean age, but for now it finishes fifth.

It’s fourth place for the blisteringly fast McLaren. It’s quite simply the fastest thing I have ever driven on the road. Hitting 60mph in 2.8 seconds is motorbike-quick – it’s shocking he speeds it can achieve in so little time. I’m amazed it top-scored in five categories out of nine here – fun, desirability, styling, performance and handling – but still finished fourth.

Understandably, it got the worst score for practicality, but that’s a slightly unfair category for the 600LT. What’s more disappointing, though, is the technology score, mostly levelled at the woeful entertainment system. For driving thrills the McLaren is hard to beat, but in this democratic scoring system it misses out on a podium place.

In third is the car I’d have given first place to. Love or loathe Tesla – and there’s a lot about the boss’s mad online rants that makes the firm rankle with many – what they have achieved is still nothing short of remarkable.

Not only have they created a huge charging infrastructure that even the big car companies have yet to realise is the key to electric car success, but with the Model 3 they’ve made a cool electric car for the masses. I like the looks, absolutely love the cool one-screen set-up, and even though the driving experience isn’t perfect, it’s still interesting and different enough to make you smile. It’s a cracking car and its top scores for comfort and technology are testament to that.

In a narrow second place was the Supra. Now this was a car I was convinced would win the second I got out of it. It offers huge entertainment for the money, has unique looks and scored solid marks across the board. Overall, it achieved slightly lower scores in terms of comfort, practicality, handling and fun, compared with the Focus, that saw it miss out on the win.

Which leaves the refreshed Focus ST on top of the pile. Hot hatches are well placed to win our annual test as they offer a great combination of performance, comfort and practicality. But the fact the Golf is at the other end of this year’s line-up shows that’s not the be-all and end-all of winning our testers’ hearts. The Focus is an entertaining, lively and accomplished hot hatch. At £32k, I’d argue it’s a little pricey, and I’m not quite sure if the looks are outrageous enough, but I won’t hold that against it.

Our RTOTY battles are often close, but with just one point separating second and third, and just six between first and second, our testers had a tough job to call it this year. But the Focus ST reigns supreme – a fast Ford back on top, and rightly crowned the winner of this year’s test. All hail the new king of Dagenham!