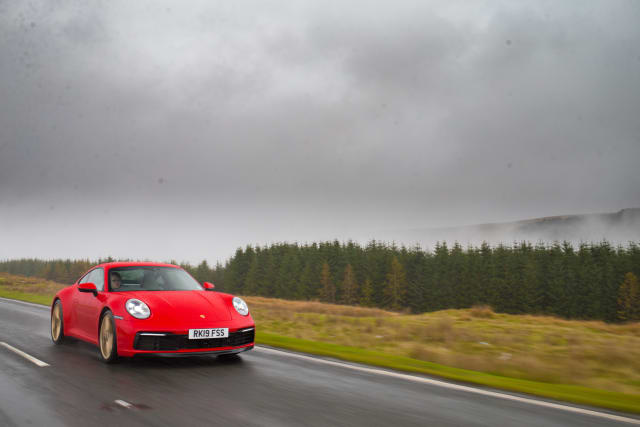 Whenever Porsche brings out a new 911, it’s destined to feature in the motoring media’s big group tests for that year. It’s not really surprising though, as for decades this has been the benchmark against which every sports car is marked – by manufacturers and critics alike.

Not that you can tell by glancing at it – unless, that is, you look over the engine cover, where you’ll see nine slits either side of two reflective strips. (And you can thank Jack Evans for that pub-chat knowledge.)

It’s a cliché that the established German looks the same every time, and, well, it pretty much does. What you’re looking at here, though, is a much-overhauled version of the classic formula, even if aesthetics wouldn’t suggest so.

To be more precise, this is a Carrera S – the not- quite-base-but-near-enough version of the car.

That means its now-turbocharged flat-six engine kicks 444bhp out to the back wheels that it hangs over. Which, of course, makes it the perfect car for me to have started a very damp RTOTY week with.

A drive from our middle-of-nowhere rented hub out to the shoot location didn’t leave me initially convinced this would really be a week, though.

I found myself in convoy chasing Darren piloting the Golf, which looked to be a perfect fit for the tight, damp back roads on offer en route. My efforts to keep up proved somewhat naive, with the 911 very keen to spin its wheels up coming out of tight exits, seeming a little too light on its feet to properly take on corners and its deceptive width proving very problematic at one particular ancient bridge.

Consider this a public apology to the nice man in a Ford Transit held up behind me as I tried not to scrape those glorious gold wheels.

It’s fair to say that initial impressions hadn’t been great. But I had a sneaking suspicion that once the roads opened up and dried out a touch, I’d get to experience what reviewers before me have banged on about for decades with the 911. I’m happy to report that’s very much the case.

Given the right amount of road and a calculated application of the throttle, the flat-six motor suddenly bursts into a heavy metal concert, rocketing the Carrera S into the next corner with real theatre coming from the twin- exhaust exit. It may get left in the dust by the McLaren we have here, but the level of drama isn’t all that far behind.

Throw it into said corner and the grip on offer suddenly becomes monumental under heavy loads. There’s no sense the car is about swing its rear-biased self out into the fields and/or off the cliffs nearby – delivering an experience akin to putting an extra magnet into a Scalextric car, slotting it in and holding the trigger down until the motor burns itself out.

I’m told this particular generation of the 911 has lost some of the drama and finesse of the older car, but that’s not something I concerned myself with while behind the wheel.

If anything, the knowledge that Porsche can and will do so much with this already impressive base in future iterations is something to get properly excited about.

Here is a car that, given the right conditions, will deliver an insanely clinical drive. There are faster cars, there are more exciting cars and there are more fun cars. But now I understood what makes the base Porsche 911 the go-to comparison for sports cars. This is a car that puts the driver firmly in control and one that’s easy to get the hang of but requires a degree of expertise to master – with approaching that latter phase an extremely rewarding experience.

Better still, this retains the luxuries lost in more hard-core and focused variants, with all of the creature comforts you could desire, in a car that feels akin to driving a heat-seeking missile locked on to a target. Adaptive cruise control? Check. Heated seats? Covered. Reversing camera? Even better – it can predict the path of the car too.

All this considered, though, it’s hard to pick the Porsche 911 as the stand-out winner from the company that it’s in. It’ll never turn a head the way a McLaren 600LT can or act as a conversation piece like the Supra. People won’t happily let you out of junctions like they may if you’re in the Morgan, or try to race you at every traffic light, as experienced in either hot hatch.

If I were to take any of these home to live with every day though, this may be the car I’d choose. Near-supercar performance in something that you won’t climb out of after 400 miles with your back twisted in three places? Sign me up.