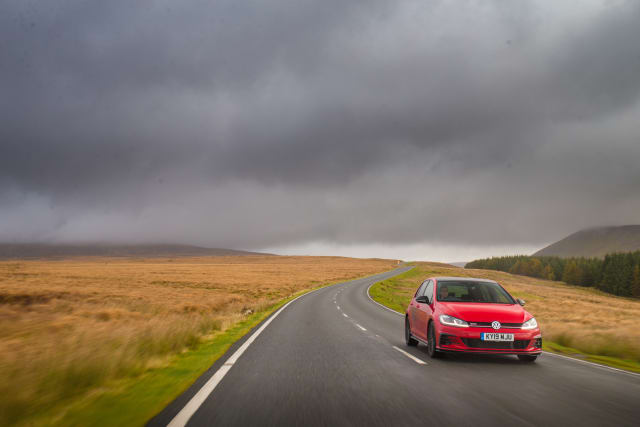 Right, I’d better get something off my chest – I’ve never been the biggest fan of the Volkswagen Golf GTI. I haven’t driven the iconic Mk 1 or Mk 2, so I can’t speak for the originals, but the more recent incarnations have left me a little cold inside. They’re effective, that’s for sure, but I’ve never felt any sparkle or charisma from one.

So, when I saw the Golf GTI TCR, I wasn’t brimming with confidence in its ability to perform at this year’s RTOTY. From the outside, it looks – save for some stickers – like an ordinary GTI, and the same can be said for the inside.

Out on the road, it was the car that blended into the background the most out of our convoy. In truth, when you take cars such as the McLaren 600LT and Toyota Supra out on the public highway, few people are going to naturally gravitate towards a red Golf instead, but you’d like to think it would be a little more noticeable. It just doesn’t look that special.

However, if someone had gone up to the VW, they’d probably have found me grinning like an idiot behind the wheel. Because look past the subdued exterior and you’ll find a car that’s a riot to drive. It’s a last-gasp special this – a swansong, if you will – before the next-generation Golf GTI arrives next year. The TCR takes inspiration from the firm’s involvement in motorsport, and although you won’t find ultra-boxy arches or a sequential gearbox, it means that the engine and suspension have been tweaked ever so slightly compared with the standard GTI Performance.

It also means there’s grip – boy, is there grip – and although there may be more of a tendency to push into understeer than you get with the Focus ST, it’s a car that can take as much as you can throw at it. Damp, slippery hairpins? No bother. Twisty, gravel-edged lanes? Come on, is that the best you’ve got?

The McLaren may have F1-style traction control and more power at its disposal than a Lancaster bomber, but put it on a damp, twisty road and it won’t know which way the Golf went. The TCR is an excellent car in which to gather up some rhythm, sewing together corners one after the other into a tarmacced symphony. It’s just such an easy car to exploit.

When things dried up – and somewhat amazingly they did, for a short period – the Golf became even sharper. I’d argue that it’s actually one of the few cars from our group that thrived in the rain, but a lack of dampness on the road helped the TCR become even more effective in the corners.

Then, because it’s a Golf, when you dial things back, it’s a great car to live with and drive slowly. The gearbox is smooth and efficient, and the steering is light enough around town that you don’t feel like you’re piloting an HGV. Heck, it even rides well – for a hot hatch, at least.

You’ve also got a decent boot, space for five people and heated seats – that last one being a welcome feature when the temperatures dropped during our time in Wales. The cabin quality is excellent, and the infotainment system puts the McLaren’s to shame, which, given the £120,000 price difference, shows how much work Woking needs to put in with its in-car tech. The TCR does all the things you’d expect a Golf to do, then.

I’d like there to be a little more flamboyance to the exterior, but a GTI is meant to be understated, after all. It isn’t meant to shout; more get the job done discreetly and efficiently. A Honda Civic Type R it certainly ain’t. I was behind the wheel of the Golf during a memorable drive with Darren Cassey in the Focus. We wove through the lanes to our Base camp in the pitch dark, the lights of the Ford bobbing around behind me as we gained momentum. The TCR just ate it up – like I said earlier, it’s a car that goads you into going quicker. It was one of the drives I’ll never forget and it’s because of the Golf that it was so special.

And I guess that’s what this model achieves so well. Whereas other GTIs tend to leave you a little chilly, the TCR has a rare knack of getting under your skin in a way others can’t. It may not be as sharp dynamically as others here, but the way it combines road-shredding performance and outright usability has to be admired.

I came away believing that – if I had the means – it would be one of the cars I’d drive away from the dealer. When that happens, you know you’ve got something special.