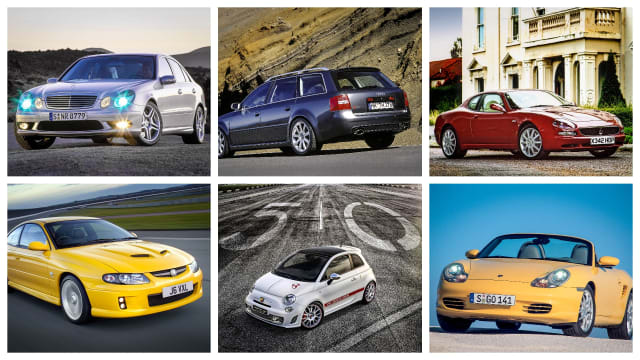 Owning a supercar is something every petrolhead dreams of. With exotic looks, serious head turning-ability and a host of performance to boot, the idea of owning such a machine will water the mouth of most.

But for most people, buying a supercar is not practical or affordable — but that’s not to say the thrills they bring are out of reach. Head into the used market with £10,000, and there are bags of supercar-like thrills to be hard…

A Vauxhall normally wouldn’t be the best place to start on a list of cars designed to bring thrills, but the Monaro has a heart and soul unlike any other motor from the brand.

Underneath the badging actually lies an Australian-built Holden, with a roaring 5.7-litre sending at least 328bhp directly to the rear wheels. Even more powerful versions are available if you dare. On top of all the power, it delivers a noise that’ll have even the loudest of Ferraris quaking in their Pirelli P-Zeros and has the looks to match too.

Not everything that offers supercar thrills has to be an attention-grabbing, big-engined machine. Some do things in a more understated manner, and that’s where the Volkswagen Golf R32 comes in.

To the untrained eye, it looks like little more than a slightly sporty Golf — but it’s packing a secret. Under the bonnet lies the famous 3.2-litre VR6 engine, spouting out and impressive 247bhp which is sent to all four wheels for serious amounts of grip. It sounds simply astonishing when it gets going, too.

Fast Japanese cars may be skyrocketing in value these days — once being the go-to for cheap performance — but there’s still affordable grunt to be found on Eastern machines.

Look toward the Mitsubishi Lancer Evolution and you’ll find some real bargains. Prices for lesser-loved early examples have yet to see price tags skyrocket to astronomic levels, but still boast all the go and rally-bred handling ability iconic variants like the VI and IX are so famed for. The performance isn’t exactly hidden either, with huge rear wings and big scoops dotted all over the place.

Big-power saloons are one of the most loved corners of modern performance motoring and for pennies, you can have one of the cars that kicked it all off. The E39 BMW M5 offered an unbelievable 394bhp from a 4.9-litre V8 when it launched back in 1998 — boasting even more than a Ferrari F355, making it a genuine supercar killer.

It wasn’t all about how much shove it had though, reviews of its time hailed its chassis involving chassis and precise gearbox too. All that — plus the ability to haul the kids that will make it an easier sell to the other half — what are you waiting for?

Practicality is not something you’re going to find in any true supercar, but there’s definitely supercar performance in a practical package if you know where to look — and the Audi RS6 Avant might just be the best execution of this.

First of all, the first RS6 — the C5 — boasted a powerful 4.2-litre that would later see action in Audi’s first supercar, the R8. Combined with a grippy all-wheel-drive system, it delivered mesmerising performance — yet tons of practicality thanks to its 455-litre boot space. Take that, McLaren…

Maserati is one of the most exotic names in motoring, but that doesn’t mean they’re all exotic prices second-hand. On a budget, it’s possible to grab one of its best modern machines — the 3200 GT.

This grand tourer boasts a sleek design, a proper Italian V8 and was even the first car to offer LED headlights — talk about luxury. With 365bhp sent to the rear wheels, there’s serious fun to be had when pressing on too. This might be as close to an affordable Ferrari as it gets…

If you prefer your budget supercar with a drop-top option, then look no further than the TVR Chimaera. This British brute can be had for a shade under £10k, and for that money offers the legendary Rover V8 under the bonnet of a sleekly-styled machine.

It may have been hailed as the easiest-to-drive TVR by reviewers at the time, but the Chimaera still boasts that brash experience and thrills you’d expect from the firm — just keep on your toes down a B road…

The Porsche Boxster holds something of an unfair reputation as being a poor man’s 911 —, particularly in its earlier incarnations. As a result, though, values today are low meaning there’s a lot of motor to be had for the money.

Ask anyone who’s had the pleasure of driving this cracking machine, and they’ll tell you it’s the real Porsche deal. With a potent six-cylinder mid-mounted engine, involving dynamics and drop-dead gorgeous looks, you’re going to drive this everywhere with a massive grin.

Think of a typical supercar and you’re likely going to imagine something loud, Italian and sexy. Well, the Abarth 595 is something that ticks all of those boxes — and packs it into a tiny, yet thrilling package.

It may only boast a four-cylinder engine, but its exhaust note screams to the top of the hills, telling the world that yes, I’m really a Ferrari, move out my way. It’s an absolute riot on a country road too and even makes for the perfect inner-city posing mobile thanks to its compact dimensions and manoeuvrability. It’s no wonder Monaco is full of them.

When looking for budget thrills and power, there’s really no shortage of late ‘90s, early ‘00s German saloons to look toward and that’s why there’s two on this list.

This time, we’re focusing on the Mercedes-Benz E55 AMG — which might be the ultimate sleeper car. If it wasn’t for the quad-exhausts at the back and prominent badging, you’d really have to know your stuff to realise it’s packing a thunderous 5.4-litre V8 under its bonnet — sending 476bhp to the rear wheels. Back in 2002, that would’ve had even the most powerful Lamborghini or Porsche squirming.