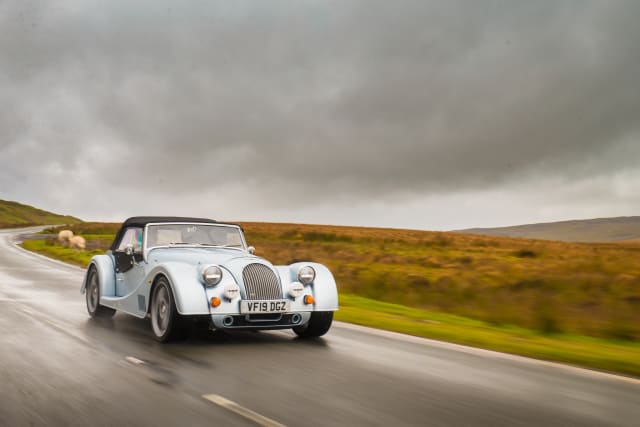 We all know that the BMW Z4 underpins both the Supra and the Morgan, but the ways the latter two present their origins are, in my view, quite different. You see, the Toyota Supra feels like a BMW. You get in it and you’re met with a BMW screen and BMW pedals. It even smells like one of Munich’s creations.

You might call me mad, but sit in one and I’m sure you’ll agree. However, hop in the Morgan and there’s not too much indication of BMW’s meddling. Yes, the gearshifter is, regrettably, the same as one you’ll get in a 5 Series – and it’s something all of us commented on when the Plus Six was released at this year’s Geneva show – but save for that, it’s solid-gold Malvern. The leather on the seats is soft and supple, while the rotary controls for the heating and ventilation are robust and wieldy.

I’d like to think that if Brunel sat in the driving seat he’d approve.

But where old Isambard may not agree is about what’s under the bonnet. The 3.0-litre turbo straight-six engine is straight-up German and, of course, it’s the same one you’ll find under the BMW Z4 as well as – that’s right – the Supra. But whereas the Supra hulks around a lardy 1,570kg, the Morgan comes in at a featherweight 1,075kg, which – and I’m no maths expert – is a lot less.

It means that when you do find the opportunity to exploit the Plus Six’s throttle pedal, you’re met with far more ferocity than you’d expect given its arguably retro exterior. All 335bhp unleashes to get you from 0 to 60mph in four seconds dead, and it’s all done with such a meteoric racket from the exhaust that it feels akin to being strapped to a locomotive. Or what I imagine that’s like, anyway.

I’ll admit, however, that when our Welsh test routes got – shock horror – a little damp, the Plus Six became a handful in a way that even Ben Stokes might deem a little testy. One occasion saw the rear of the car stepping out in a big way after an amount of throttle was applied that wouldn’t usually see such an elaborate pendulum effect. Entertaining, of course, but unexpected. To drive the Morgan quickly, you need an up-to-date prescription of brave pills, that’s for sure.

And while the others here attempt to draw glances with wings, edges and jazzy paint colours, the Morgan gets its styling done in a classically British way. And guess what? Most people naturally gravitated towards the Plus Six wherever our convoy stopped up. It’s nice to see that classy styling still goes the distance.

I think the reason that the Morgan is a car worth being here is because it’s honest. Whereas the Supra feels like a BMW Z4 wearing one of those lively Kappa tracksuits, the Plus Six takes the key ingredients available and combines them into a blend that is both new-age yet true to what people love about Morgan. Like a roast dinner in a focaccia roll, perhaps.

It may have a fiddly roof and, yes, there isn’t a 20-inch million-colour, my-I-can-play-a-game-I-got- bored-of-back-in-2001 touchscreen like the Tesla, but it has character – and that’s hard to come by with cars in 2019. It’s more refined than you’d expect too, and although the ride has a sharp edge to it that can make around-town driving a bit uncomfortable, once you’re up to speed it settles down. It even has heated seats.

But the overarching thing you get with the Morgan is that performance. In the Supra, it feels somewhat blunted – still quick, mind you – but in the Plus Six, you feel you’re getting the full-fat experience rather than the semi-skimmed one.

The eight-speed ZF gearbox is another high point; effortless in full auto and quick to shift in manual mode. It’s just a shame that Morgan fitted shift paddles that aren’t all that pleasant to use or located quite where you want them. It’s something you notice immediately, and I just wish it had been changed.

So, while the Morgan Plus Six may start to falter when it comes to conventional parameters, it goes above and beyond in terms of outright experience. It’s an occasion, and given that our Road Test of the Year event is all about celebrating our very favourite cars from 2019, it’s an occasion that feels well worth celebrating.