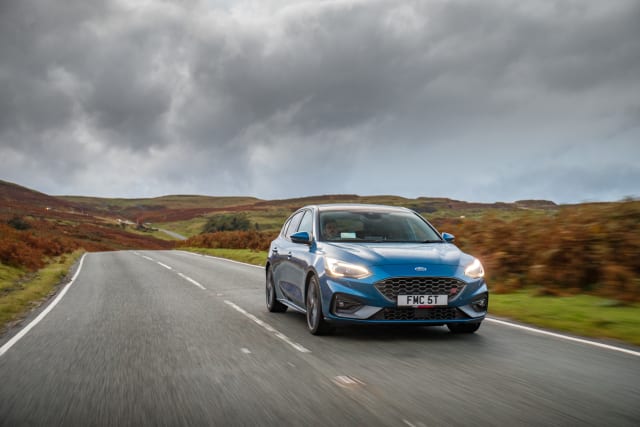 I’ll admit to being a little nervous about bringing the new Ford Focus ST to Wales for this gathering on 2019’s greatest hits. Why? Because I was the one who attended the launch of this new model shortly before we go together to discuss this year’s contenders. Therefore, it was I who championed its inclusion.

That day I’d been charging along the Route Napoleon in the south of France, chucking this eager hot hatch up a picturesque mountain pass and treating its tyres with complete disdain.

It was quickly clear that Ford wasn’t joking about the Focus ST being a serious bit of kit this time around. From a sunny mountain soaked in Mediterranean sun, I now found myself on another mountain, this time in Wales and soaked in H2O. The heavens had opened en route to our test location deep within the Brecon Beacons, making dual-carriageway progress slow as I squinted through the spray kicked up by the cars around me.

It did give me time to contemplate the Focus’s vital statistics, though. The engine is a 2.3-litre turbocharged four-cylinder unit, similar to the old-gen Focus RS but closer in construction to the Mustang’s EcoBoost option, Ford reckons.

The figures are 276bhp and 420Nm of torque feeding the front wheels. Our test car was fitted with the six-speed manual but a seven-speed auto is also available. The 0-60mph sprint takes under six seconds and its top speed is 155mph. All bang-on for the segment.

We also have drive modes for the first time in this model for sportiness in spirited driving and a more chilled experience around town, a new suspension set-up, plus comfy and supportive Recaro seats.

The big news, though, is the limited-slip differential (LSD) – a clever bit of kit that’s essential for modern hot hatches. To massively over-simplify, front-wheel-drive cars struggle to put power down, making the driver fight with the wheel to keep the car straight or manage throttle inputs to stop it running wide at the exit of the corner. An LSD works to fix that.

The old Focus ST didn’t have one. It had an electronic system that used the brakes to mimic an LSD’s effects, but it never really worked. Throttle down hard in a low gear and the car would make a beeline for the nearest hedge.

However, in Ford’s efforts to make this Focus ST a serious contender, its engineers have fitted one. At the launch in France it worked well, but could it cut it on a cold, rainy morning in Wales?

With dual carriageways a distant memory, the roads narrow and hedgerows eventually open on to the endless brushland of the Beacons.

It’s time to figure out the reality of those numbers and initials.

I prod the sport button on the steering wheel to prime the car, shift down to third and plant my foot. The engine comes alive with a gruff growl, the revs surging towards the red line with surprising urgency. Third gear is long and where you’ll spend most of your time – I don’t think I ever took fourth while hooning around.

That said, the first corner on this particular stretch is fast approaching: a tight left-hand hairpin with a sharp incline on the inside that kicks the car on to three wheels. As I hit the brakes – which could do with being a bit beefier, to be honest – I notice that while the rain has stopped, remnants of a downpour further up the mountain are now streaming across the road.

Grip should be non-existent, but with plenty of lock and second gear engaged, I plant my foot mid-corner. The wheels scrabble at the road and fight valiantly to cut through to the black stuff, the LSD doing a grand job of containing matters. The ST takes this all in its stride, the engine punching its torque into the sodden tarmac and catapulting me towards the clouds that linger ahead like a thick fog.

After a day of jumping in and out of cars, dodging downpours and taking more photographs than an Instagram influencer, night falls. And it’s then that I have what I’m calling ‘The Drive’. The one that makes me go from merely appreciating the Focus’s talents to genuinely falling for the thing.

Out in the sticks, on a narrow road lit only by headlights, I find myself following a colleague in the VW Golf GTI TCR – a direct rival for the Ford. He knows the road well so I stick close behind, driving at speeds I wouldn’t dare in more expensive, sporty machinery, all the while grinning like a Cheshire cat.

The headlights of the more expensive, more powerful Toyota Supra behind me quickly fade into the distance. The hard-core hatchback changes direction with urgency, never feeling like it’s got anything other than monumental grip, and has an engine that loves nothing more than full-throttle charges. It darts left and right as hedges blur past at warp speed. It’s utterly fantastic fun.

I’m not going to pretend it’s perfect. For a start, the steering is frustratingly heavy when you’re driving around town, while some would argue it doesn’t look special enough for the price.

But for any car enthusiast who grew up idolising fast Fords and who tends to do their spirited driving on tight, broken British tarmac, there can be few cars better suited to the task.

Before driving it, the substantial price hike north of £30k might seem like a lot to stomach, but you certainly get what you pay for.

After a few years as an outsider in the hot- hatch segment, the Ford Focus ST is finally a contender for the podium.