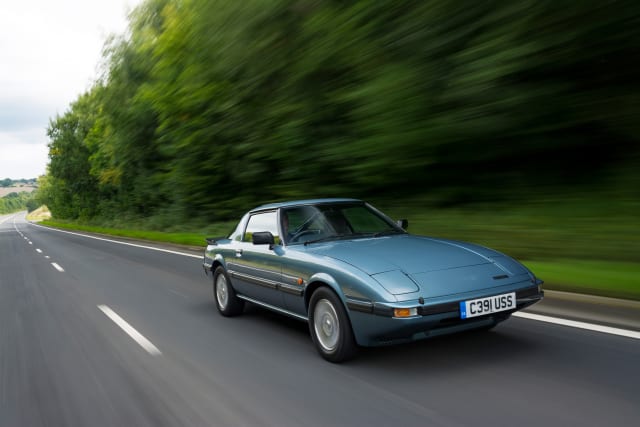 The Mazda RX-7 is a lightweight, two-door sports car that was produced from 1978 to 2002 and is widely admired as one of the very best vehicles of its type. Incredibly popular, close to 800,000 were produced during its lifetime, which just goes to show that this is one Mazda people simply couldn’t wait to get their hands on. The original RX-7 even gained some motorsport kudos, narrowly missing out on a place in the 24 Hours of Le Mans – just avoiding qualification by less than a second.

What the RX-7 has always had on its side is an extremely low weight. You won’t believe how compact the first-generation car is, and even the bulbous Fast and Furious-age third-gen RX-7 gives a Lotus Elise a run for its money in terms of weight.

The driving experience is fantastic, because it’s all about high- energy, high-octane fun delivered in a sleek package, and it’s not until you mash your foot into the carpet and unleash the power of that rotary engine that you realise just how clever this car is.

What’s it powered by?

All three generations of the RX-7 were famed for their use of a compact and extremely lightweight Wankel rotary unit. The benefit of them was that they took up a lot less space in the engine bay, which meant the car could remain compact. Just 1.1 litres in capacity, the Wankel gave the RX-7 a free- revving, energetic character.

The test car here is from 1983, when the engine produced around 113bhp – with all power sent to the rear wheels through a five-speed manual. The sprint to 60mph time may not sound all that rapid today but the 8.2-second dash was pretty sprightly for the time.

All in, you’d be able to do 125mph – and that was close to Porsche-scaring. In fact, the RX-7 undercut the 924 – its closest rival – by some margin, making it one of the best-value sports cars on the market. While you may have been put off a little with a Mazda (Porsche badges do have prestige), you would have been rewarded with one of the sweetest-handling two-doors around.

How are values today?

Even though the RX-7 was hugely popular, getting your hands on a decent used example can be tricky. Early models will command in excess of £10,000 – if you can find one, that is – while later twin-turbo models will likely set you back by about £8,000, depending on condition.

It was produced for quite some time, so it’s really down to which generation you fancy. Earlier models are becoming sought after – they’re being snapped up fast.

Of course, there’s also the import option – and this can be an easy way to get your hands on a clean example. That said, it does require a little more work than buying a car the conventional way – but that’s not to say it isn’t worth a try! The RX-7 is only likely to become rarer and therefore more expensive – so it’s a good car to try to get hold of today, even if that means it has to arrive by boat!

What were its rivals?

When Mazda first set out to create the RX-7, it did so to replace the RX-3 – but wanted to ensure that its successor was sportier and more driver-focused than before. However, by doing so, the RX-7 strayed into the path of some big-hitters of the sports car scene – the Datsun 280ZX and Porsche 924.

Though the 924 may not be seen as one of the all-time greats from Porsche, at the time it was a real contender. The RX-7 couldn’t quite match the Stuttgart sports car in terms of badge prestige, but it undercut it by some margin when it came to price.

The original RX-7 experienced a wealth of positive reviews when it came out, with many testers praising its agility and lightness, as well as the flexibility of that rotary engine. Power was boosted shortly after with a turbo version, but that original RX-7 will always be remembered as one of the first Japanese-made sports cars to take on established rivals at their own game.

Anything to look out for?

I’d say that there are a few things you need to keep an eye out for if you’re planning on running an RX-7. It uses an awful lot of oil – so you’ll be spending a lot of time at motor factors – and it does tend to go through tyres pretty quickly. These are serviceable items that do need replacing – you can’t get away without them – and over the lifetime of the car that can become expensive of course.

As always, it’s best to check that the car has a full service history and has been maintained to a decent standard – this should avoid any initial hiccups. Head gaskets need monitoring as they have a tendency to go quite easily, too.

Those of you with a heavy right foot are going to spend a lot of time at fuel stations, as economy can plummet during hard driving – and it will struggle to creep upwards even when used carefully. With plenty of regular maintenance, though, an RX-7 should be a pretty no-frills thing to keep running.