Long-term report: Our new Ford S-Max Vignale is thrown into action at the deep end 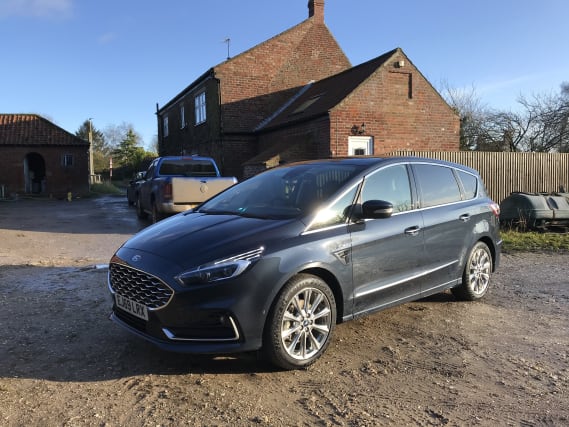 With our Ford Focus Vignale having now departed, it’s time to introduce its replacement – a distant Vignale relative at the other end of the Ford spectrum, the S-Max.

To those not acquainted with ‘Vignale’ – it’s essentially Ford’s premium sub-brand that aims to offer something more upmarket than the regular range, with a target to rival the Audis and BMWs of this world.

But while more and more buyers are plucking for SUVs over MPVs like the S-Max, the Ford aims to fight back and it’s already demonstrating its worth to us.

More on that later, but first an introduction to EJ69 LRX.

This is the latest version of Ford’s S-Max – the current iteration being on sale since 2015 – though our car is the facelifted model that has only been on sale for a few months.

It’s a facelift in a rather mild sense, with key styling changes being limited to new alloy wheels and a revised front end. It also introduces a host of connected services through FordPass Connect, with a Wi-Fi hotspot for up to 10 devices being one of the key highlights.

It continues to be available in Zetec, Titanium, ST-Line and Vignale grades, with our latter model bringing with it more blingy chrome than you could shake a stick at, as well as upmarket upholstery, massaging seats and a frankly terrific 10-speaker Sony sound system.

EJ69 LRX comes painted in Blue Panther – a rather flat colour on a dreary day, but glittery when the sun’s shining, and, bizarrely in this day and age, it’s also a no-cost colour option, too. A win-win.

As standard it costs £40,660, but with a panoramic glass roof (£900) and a fantastic Vignale Assistance Pack, which is a worthy £1,000 option – adding park assist, adaptive cruise control, blind spot monitoring and a front camera. All in all, it costs a rather hefty £42,560.

Our S-Max has only been on the fleet for a few weeks, but it’s already proven its worth at a time of year when people carriers and seven-seaters are perhaps at their most useful – Christmas party season.

On two occasions recently it’s carried six adults in surprising comfort and saved us having to take two cars instead – also meaning we haven’t been paying two lots of fuel and parking. Ford tells us there are 32 seating configurations, and while we’re yet to sample all of these, it’s certainly proving impressively versatile.

Each of the second-row seats slide and fold independently – allowing easy access to the third row, and meaning that there is a decent amount of room on offer. Even headroom and legroom for those right in the rear of the car isn’t compromised. Handy tray tables also give ample opportunity to either work, eat or drink.

Thanks to a several long jaunts, it’s already clocked up nearly 2,000 miles in less than a month, which has meant enough time to expose one little gremlin.

And it’s something that concerns traction, as our front-wheel-drive car has a tendency to spin the front wheels with barely any throttle. It can be a bit disconcerting at times, and it’s exaggerated with the more people you have on board. Ford also offers an all-wheel-drive version of the S-Max, which we imagine sorts out this issue.

I’m sure that it’s something we’ll get used to as time passes by, and it will hopefully mean an even more positive experience from the S-Max Vignale. With even more longer trips planned over the coming weeks, it will provide even more time to experiment with the S-Max and its impressive list of standard kit – the sound system and massaging seats being next on my hit list…