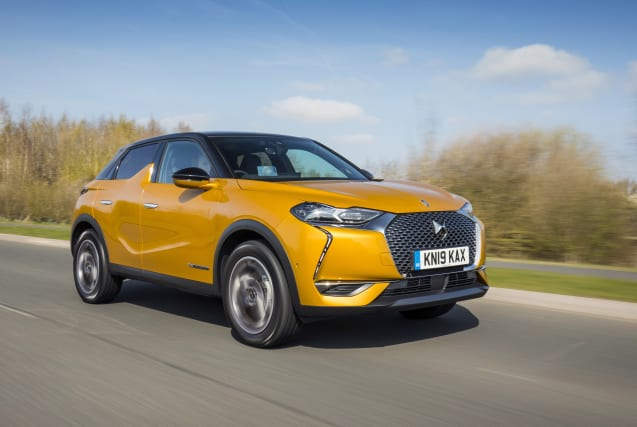 What do you know DS best for? That iconic ‘60s Citroen model that this brand is essentially named after or the rebadged Citroens that existed between 2010 and 2017? Modern DS aims to be something a bit different to that, with this firm’s bespoke models starting in 2017 with the DS 7 Crossback SUV.

Following on from that model is the new DS 3 Crossback – a compact crossover that aims to inject a bit of French luxury into the premium end of this sector. It replaces the original DS 3 supermini and aims to combine the style of what made that model so popular with the all-important crossover looks that buyers crave.

Here we’re trying it in the stylish Performance Line grade.

The 3 Crossback is only the second bespoke model to come from DS since it split from Citroen.

It’s the first model to sit on the PSA Group’s new CMP platform, which is also underpinning the new Vauxhall Corsa and Peugeot 208. It means that the Crossback is offered with petrol and diesel engines, as well as an all-electric powertrain that arrives at the start of 2020.

The DS 3 is available with a choice of three petrol engines and one diesel unit – the petrol variants making up the bulk of sales.

All petrol engines use the turbocharged 1.2-litre ‘PureTech’ unit that is widely used in other Peugeot and Citroen models. We’ve previously tried the DS 3 with a less powerful version of this engine, but this is the first time behind the wheel of the punchier 153bhp unit.

It’s certainly more powerful than the other two – delivering smooth performance that enables a 0-60mph time of eight seconds and a claimed top speed of 126mph. The engine feels equally as good around town as it does on the motorway, though it can feel a bit gruff under heavy acceleration. It uses an eight-speed automatic transmission which is responsive and pleasant to use, while paddles are also on the steering wheel if you’d prefer to change gear yourself.

For an urban-aimed model, the DS 3 Crossback’s low-speed ride around town is a little disappointing, and instead it seems to be on the motorway where this model seems to feel the most settled and comfortable, with the sports seats offering plenty of support.

But it’s also surprisingly good to drive on more twisty roads, with sharp steering and minimal body roll making this feel like one of the more dynamic models in its sector.

Though the Performance Line’s minimal tweaks might give it a sportier look, the changes when it comes to driving are small. Though with no hot version likely to follow, this is the trim to go for if you want that sportier feel.

Many criticise modern cars for all looking too similar, but that is most certainly not the case with this DS.

French manufacturers are known for standing out from the crowd when they design their cars, and thanks to the DS 3’s pop-out door handles, large alloy wheels and chunky design – there is little else that looks quite like it on the road.

While all DS 3 Crossbacks look the part, the Performance Line version is undoubtedly the one to go for if you prefer that sportier looks – achieved through the black styling pack, unique 17-inch alloy wheels and revised bumpers.

Look inside to the DS 3 Crossback and it’s clear that the French brand has completely thrown out of the typical cabin rulebook. On first glance it looks like an ergonomic nightmare – there are buttons everywhere. But think of it like from moving from a bungalow to a two-storey house – at first it feels bizarre, but you soon adjust to its quirks and differences.

But don’t go buying the DS 3 Crossback if you’re wanting something spacious and practical as this is one of the least roomy interiors in its class – the rear seats offer little space for adults and the 350-litre boot is small next to many of its rivals.

All DS 3 Crossbacks come well-equipped, though admittedly you pay more in the first place, with models starting from £22,120.

In Performance Line grade you get 3D LED rear lights, along with a black styling pack and tinted windows, to name but a few features. Upgrading to the Prestige brings a 10-inch touchscreen with a 3D satellite navigation, front sensors and full leather upholstery, while Ultra Prestige features a head-up display, 18-inch alloy wheels, massaging front seats and Matrix LED headlights.

It’s easy to criticise the DS 3 Crossback for its odd interior layout, practicality misgivings and high list price, yet somehow despite these issues, this French crossover is remarkably appealing – particularly in this Performance Line trim.

Next to other models in this somewhat bland segment, the DS 3 deserves high praise for establishing its own path against the likes of premium established players from Audi and Mini.

It’s not going to tempt buyers out of those cars just yet, but if you’re looking for a more upmarket and exclusive crossover than the run-of-the-mill offerings, this is a worthy option.