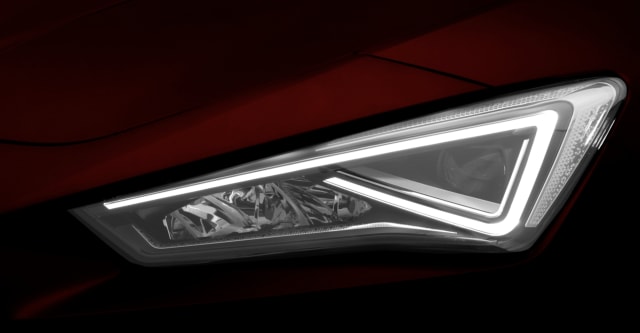 Seat has offered a first glimpse at its all-new Leon ahead of a full reveal in January.

Following on from the latest Volkswagen Golf and all-new Skoda Scala, the next generation Seat Leon will round out a refresh of the VW Group’s C-segment models.

The Spanish firm is keen to highlight its lighting technology ahead of the unveiling of the fourth-generation Leon, with a short teaser video giving a brief look at the head- and taillights of the vehicle.

Its front units look to take on the latest corporate design from the firm — with a sharp, thin LED line outlining an angular design — with the rear one long lightbar that’s reminiscent of a similar setup on the Tarraco SUV.

Seat says the model ‘incorporates full LED technology’ and will include indicators with a ‘dynamic’ pattern to them — similar to those seen on other VW Group models as of late. A low-lit shot of the interior also shows an LED lightbar running through the cabin, as well as a digital instrument cluster and large central touchscreen.

Alejandro Mesonero-Romanos, Seat director of design, said: “Advanced lighting technology is key in enhancing a vehicle’s design. In the all-new Seat Leon, we have been able to use it to great effect to empower its already strong character. Inside, its wraparound ambient light takes the new Leon to yet another level of functionality and aesthetics.”

Expect to hear more on the fourth-generation Seat Leon following its reveal on January 28.