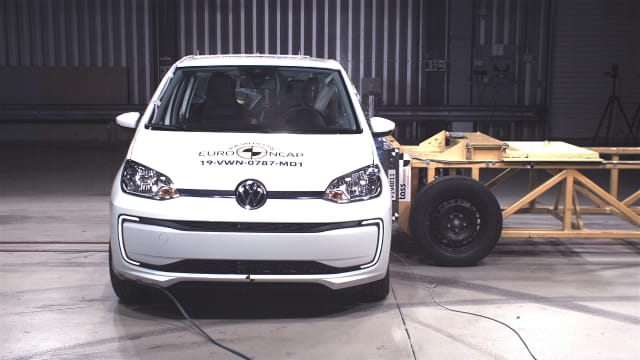 The Volkswagen Up! has dropped to a three-star safety rating in the latest round of Euro NCAP tests.

Previously awarded a maximum five stars when it was first assessed back in 2011, the Up! dropped two stars mainly as a result of Volkswagen’s decision to remove autonomous emergency braking (AEB) from the car’s options list.

Though the tests were conducted on the all-electric e-Up!, these scores also apply to the new petrol-powered Up! as well as its Seat Mii and Skoda Citigo sister cars.

In 2011 the Up! scored 86 per cent for safety assist technology, in part down to its inclusion of a seatbelt reminder and electronic stability control systems. However, during this latest round of tests it scored just 55 per cent in this category.

Despite AEB being removed from the options list available with the Up!, Volkswagen still includes lane keep assist. However, this wasn’t enough to dramatically increase the car’s score.

This latest round of tests saw the latest MK8 Volkswagen Golf awarded a full five stars, along with the Audi Q8. It also saw good scores for MG, with the firm’s HS and ZS EV vehicles both awarded a maximum five-star score.

Ford’s all-new Puma small crossover returned a five-star score too, with NCAP stating that it enters the market ‘as one of the safest choices in the lower price segment’.

Euro NCAP had also planned to test the Opel Zafira Life – badged as the Vauxhall Vivaro Life in the UK – but cancelled testing as it discovered that the Zafira Life is essentially a rebranded PSA van first tested in 2015.