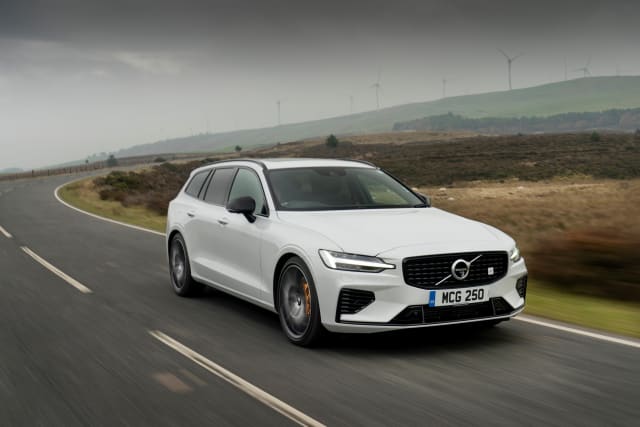 Volvo estate cars usually conjure up thoughts of sublime comfort, endless practicality and whisper-quiet refinement. Traditionally that’s the case, but occasionally the Swedish brand likes to surprise us drivers, with performance-orientated wagons like the 850R of the mid-90s, or the 3.0-litre straight-six-powered V60 Polestar from 2014.

Now, there’s a new one – and it’s a hybrid. Utilising the plug-in T8 powertrain, this V60 Polestar Engineered promises a more involving drive while still using an electrified setup.

With a range of mechanical enhancements with the ability to drive on all-electric power for a limited range, this could be a Volvo for all occasions. But is it? We’ve been behind the wheel to find out for ourselves.

Though Polestar is now very much a brand in its own right, producing hybrid and all-electric offerings with typical Scandi minimalism, these Polestar Engineered Volvos can be thought of more as a trim level – albeit a particularly sporty one, at that. The gold exterior touches are immediately noticeable as different to the regular V60, as are the go-faster seatbelts finished in an equally jazzy gold colour.

But in classic Volvo fashion, the V60 Polestar Engineered isn’t a car which shouts about its increased capability, instead featuring a few subtle tweaks which will highlight it to the trained eye while flying unnoticed by those who are less performance car-savvy.

The V60 uses Volvo’s T8 powertrain which combines a 2.0-litre four-cylinder turbocharged petrol engine linked to an electric motor. Volvo claims that the 399bhp and 430Nm it produces is enough to send the V60 from 0-60mph in just 4.4 seconds and onwards to a top speed of 155mph. However, as a result of that electrified powertrain, the T8 can return a claimed combined economy figure of 104.5mpg while emitting just 48g/km CO2. So it’s clean, as well as quick, then. You should be able to travel up to 27 miles on electric power alone, too.

But there’s a lot more going on underneath the V60 Polestar Engineered than just an engine. A full Ohlins dual-flow damper setup has been fitted – adjustable, but not adaptive – controlled via small, copper-coloured dials at the top of the front struts. Adjusting the rears requires jacking the car up, however.

The first thing you notice in the V60 is the suspension. It’s firmer, that’s for sure (noticeably firmer than a regular V60’s) but it’s got that supple edge that you only get with quality damping setups from high-end companies like Ohlins. The steering is sharper, too, and it’s more confidence-inspiring than the one fitted to the standard V60. Upgraded Brembo brakes also give far more effective stopping performance and represent another key performance addition.

Is the powertrain exciting enough for a car like this? Certainly, having that electric assistance gives a good amount of edge to the performance thanks to that instant pick-up you only get with a hybrid setup. It’s not brimmed with drama, however, and that’s something which leaves the V60 feeling a little cold. You can’t fault its effectiveness, though, and at a cruise or on the motorway it’s beautifully refined and judged. Find quicker corners and the car’s weight can be noticed but the body control is excellent thanks to that Ohlins setup.

As we’ve already mentioned, the V60 Polestar Engineered’s exterior design represents a masterstroke in how to translate performance in a subtle, less out-there fashion. Particularly in estate form, it’s a car which gives little indication that it’s packing close to 400bhp and can reach 60mph from a dead stop in just over four seconds.

Larger alloy wheels do deal it a lot of presence, while the redesigned front grille and large rear splitter do single the V60 out as something a little different from the ordinary.

In truth, apart from the gold seatbelts, the interior of the V60 Polestar Engineered feels largely the same as the standard V60. That’s no bad thing, mind you, as everything is superbly fitted together – it manages to feel robust without low quality. The central touchscreen remains a dominating feature of the cabin overall, and it lends a streamlined, minimal-fuss aesthetic to the area you’re sitting.

The front seats are comfortable and offer plenty of support and, because the V60 is an estate, it covers off the practicality basis well. In fact, there are 529 litres of boot space available off the bat, rising to 1,441 litres if you drop the rear seats flat.

The majority of the Polestar Engineered’s specification resides around mechanical upgrades. After all, Brembo brakes, revised steering and Ohlins dampers aren’t features you can normally find on regular estate cars. The main infotainment offering remains one of the more intuitive options on the market today and incorporates smartphone integration tech, too.

Given that this version of the V60 starts from £57,000 means it’s punching high in the segment in terms of price, but the combination of plenty of performance upgrades alongside a good amount of standard equipment means it goes some way to justifying this price.

The Volvo V60 T8 Polestar Engineered might not be the most evocative of performance estate cars, but that doesn’t stop it from being effective. It’s refined, quiet and, thanks to that electrified powertrain, efficient too. Against rivals like the Mercedes-AMG C43 estate or the Audi S4 Avant it could be seen as a less exciting option, but low running costs help the V60 to rally against these offerings.

It may not be the most effective of performance estates, but as an all-rounder with a few noticeable touches to make it feel special, then the V60 Polestar Engineered is a great choice.