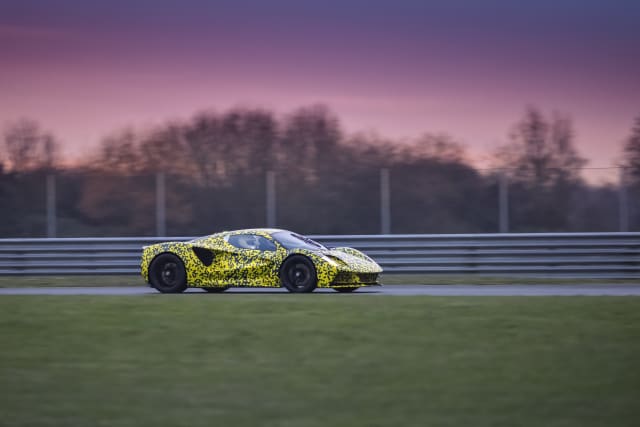 Pictures of the new Lotus Evija being put through development testing have today been released, giving us a closer look at the firm’s upcoming all-electric supercar.

Pronounced E-vi-ya, the Evija is the firm’s first all-electric model and is being assembled at the firm’s headquarters in Hethel, Norfolk.

Gavan Kershaw, British GT racing driver and Lotus director of attributes, is the person behind the wheel in the testing photographs. Speaking about the Evija, Kershaw said: “The car is in a completely pure state at the moment, with no stability control or torque-vectoring.

“This is so we can evaluate the fundamentals of the chassis, to create the mechanical advantage before the other layers, such as the electronics, are added. It means we can really read the car. Later we can tune what we’ve gained as a mechanical advantage as we add layers. It’s the Lotus way – get the fundamentals right from the start and use baseline aerodynamics, suspension kinematics and geometry to feel the vehicle’s response. I feel really at home in it, it’s really driveable.

“We assessed the stability and agility through tight corners. We did brisk accelerations to work out the torque split and looked at tyre grip and response. Lotus has always been about ‘input equals output’, so if you do something you get a response, and that’s what we’re balancing now. It’s all about the detail so, for example, we’re validating the progressive response from the pedals.”

Due to be limited to just 130 units – with each one commanding a £1.7 million price tag – the Evija is set to arrive in the middle of next year. Lotus is currently accepting refundable deposits of £250,000 to secure a build slot.

The firm is said to be targeting power outputs of 1,972bhp and 1,700Nm of torque with the Evija, with a 70kWh battery and four powerful electric motors on each wheel resulting in a claimed 0-60mph time of less than three seconds and a top speed of over 200mph.