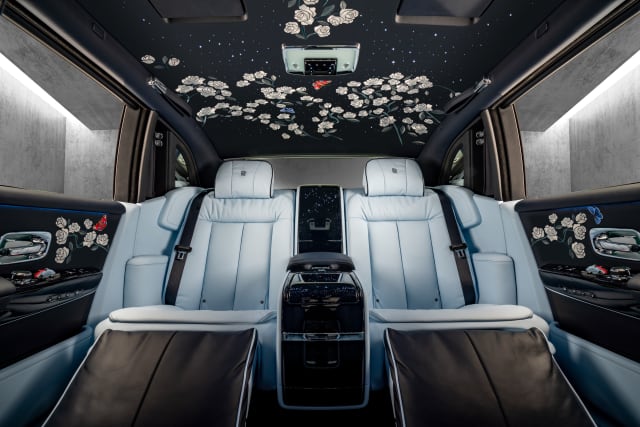 Rolls-Royce has revealed a one-off headliner for a Phantom featuring a flower design crafted from one million stitches.

Commissioned by an unnamed Stockholm-based customer, said to be an aficionado of flowers and even naming two of his four children after them, the British luxury car firm says it ‘immerses its occupants in a beguiling floral scene’.

The design is said to be inspired by the Rose Garden in Goodwood, where Rolls-Royce is based. With the exterior of the car finished in Peacock Blue, the interior of this Phantom features Charles Blue upholstery, with it said that the two ‘intertwines organically like the stem of a rose’.

Throughout the cabin, stitched into the headliner and also panels on the doors are multiple ‘Phantom Roses’ — said to be a type of rose bred exclusively for Rolls-Royce and grown only in Goodwood.

Torsten Müller Ötvös, Rolls-Royce Motor Cars chief executive, said: “The Rose Phantom is a stunning iteration of a contemporary Rolls-Royce. Our extraordinary craftspeople at the Home of Rolls-Royce have achieved, with this car, something which can only be described as sublime.

“The work of our Bespoke Collective is the best in the world. When I look at creations like this car, it is with a sense of pride that I know that these skills could not be replicated anywhere else in the world. This is undoubtedly one of the greatest Rolls-Royce Phantoms of its generation.”