Audi brings RS5 range up to date with visual overhaul 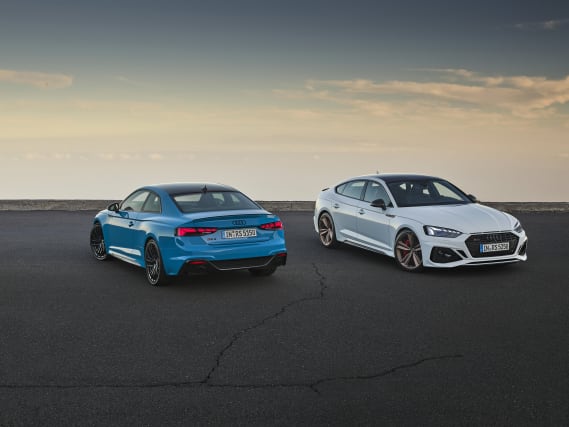 Audi has introduced a raft of upgrades to its high-performance RS5 range.

Available as a coupe or in ‘Sportback’ saloon guise, the German machine has received a visual overhaul to bring it in line with the latest wave of RS cars.

Up front, a wider and flatter grille now heads up the design, while a trio of air vents at the base of the bonnet are a nod to the Audi Sport Quattro hot hatch from the ‘80s. Sitting at either side of the grille is a set of newly-shaped air inlets, while at the rear, the diffuser insert has been slightly altered.

Two new colours have been introduced to the car as well — namely ‘turbo blue’ and ‘tango red’. Matrix LED headlights are a standard fit across the range, with Vorsprung versions of the RS5 — the UK range-topper — featuring a darkened surround.

Inside the car, all UK cars will feature RS sport seats finished in Nappa leather as standard, along with a 12.3-inch ‘virtual cockpit’ display in place of traditional dials gauges. This is complemented by a 10.1-inch infotainment display, which is now slightly tilted towards the driver.

No mechanical changes have been made to Audi RS5, meaning its 2.9-litre twin-turbocharged V6 continues to produce 444bhp and 600Nm of torque. That power is sent to all four wheels via an eight-speed automatic gearbox, allowing both cars to cover the 0-60mph sprint in 3.7 seconds and on to an electronically-limited 155mph top speed — raised to 174mph on Vorsprung cars.