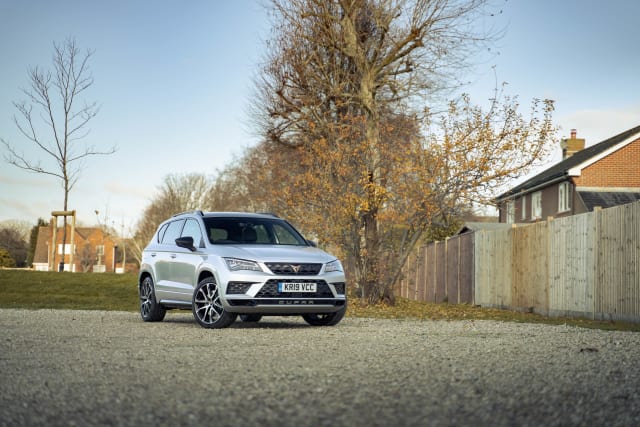 We’ve had the Cupra Ateca for a few months now, and the hot hatch-turned-SUV has won itself many fans within the office.

I took the keys on first arrival and found that while I enjoyed the high specification on offer, I wasn’t convinced its Volkswagen Golf R-derived underpinnings were well-suited to this package.

My colleague Jack then took the keys for a few weeks and reported that not only did he enjoy the 296bhp on offer, he particularly liked the fact that the Ateca doesn’t sport a wild body kit, lairy paint job, or the bronze alloy wheels that are available. In fact, he went on to praise its role as an “undercover performance car”.

Following this high praise, I was keen to jump back behind the Ateca’s wheel to see if there was something I’d missed. Has absence made the heart grow fonder?

At a first glance, yes. Jumping into the Alcantara seats I was reminded how comfortable they are, and the driving position is decent even for my lanky frame. The Bluetooth found my phone immediately from its memory bank, and the engine barked to life with a wholly artificial but satisfyingly deep burble.

And on the first major roundabout on my commute home I was left impressed by the performance on offer. In the mid-range of the revs in each gear the engine is punchy, leaving left lane dawdlers a distant memory in your mirrors.

Perhaps I’d been a bit harsh on the Cupra? After a few days, though, I was back in the same routine, leaving the car in its comfort setting and driving around at a leisurely pace. The problem is, while it might, in many ways, be a Volkswagen Golf R hot hatch underneath, it’s just nowhere near as exciting to drive quickly.

It’s almost certainly down to the extra weight and the higher centre of gravity, making it feel slower than the figures suggest. It’s great for a squirt of throttle during a motorway overtake, but when you’re pushing on through the gears it’s a little underwhelming.

I’m still really enjoying the Ateca as a well-specced SUV with a decent bit of poke when you need it, but with prices starting at £36,695, it certainly ain’t cheap. I can’t help but feel that if you need performance and practicality, get a VW Golf R Estate, and if you need SUV-like proportions, opt for the smaller and probably wieldier VW T-Roc R. It has near-identical underpinnings, after all.

It’s an odd car, this. I’ve long loved Seat Cupra hot hatches – the brand knows how to make fun, fast cars and the future of the brand is likely to be strong. And in many ways the Cupra Ateca is great – it’s got plenty of kit, it’s nice to drive, and has a punchy engine. But as a performance car? I’m not so sure.

With fuel economy dropping below 30mpg on a long weekend with the car, I want a little more excitement in exchange for my extra petrol station visits.

There are times, though, where the Cupra feels quick and alive, seemingly at its best at three-quarter throttle charging up to motorway speeds. It’s these times that I doubt myself – there’s definitely a fun, fast car in here, and it rears its head regularly.

Fortunately, we still have a few months to continue getting acquainted with the Ateca, because as it stands, I’m sitting firmly on the fence.