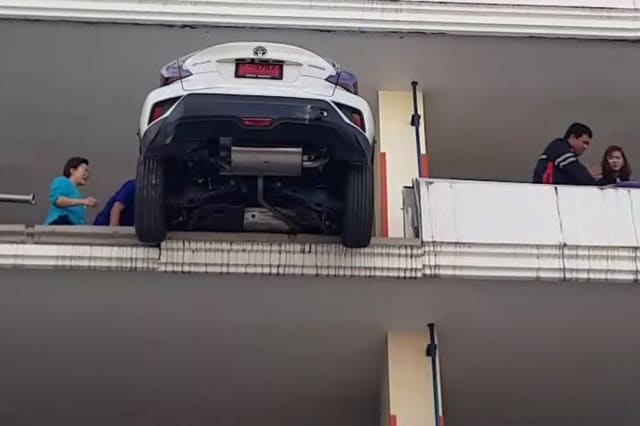 A hapless driver has given a masterclass in bad parking after hitting reverse instead of accelerate and smashing through a 50ft-high concrete wall.

The woman behind the wheel had just arrived to work at a government office and was trying to reverse into a space on the fourth floor of the car park in Thailand.

Footage from the car park shows her edging into the space, straightening up and then suddenly lurching backwards.

The brand new Toyota C-HR then smashes through the concrete barrier and is left hanging dangerously over the drop, around 50-feet in the air.

Shocked staff at the country's Ministry of Health run to help her, and she is eventually carried to safety.

The clumsy worker, who was too embarrassed by the incident to reveal her name, told local television news that she had recently bought the automatic transmission car and was confused by the two different pedals.

She said: "While I was adjusting the parking position I accidentally trod on the reverse pedal instead of the accelerate pedal to drive forward."

"When the car moved backwards, I was so panicked that I pressed the pedal harder. Then the car hit the barrier and the rear wheels were hanging of the building. That's what caused the car to stop moving."

''It's very lucky, because if the car had kept moving backwards it would have fallen off the edge and I might not have survived.''

You can see what happened in the video above.