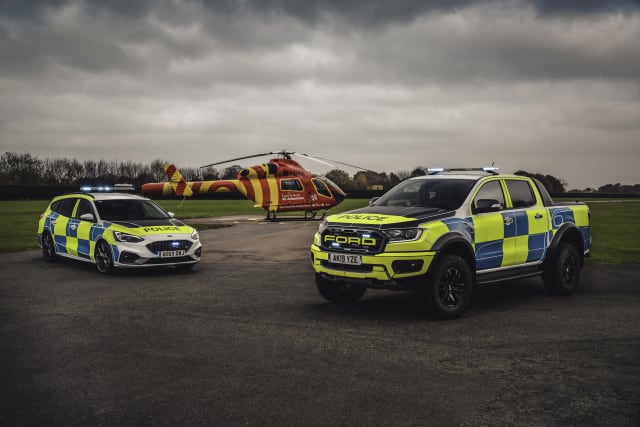 Ford has kitted out two of its latest performance models for the police, with forces across the country said to be lining up to test the models.

South Wales Police are the first to put the vehicles through their paces, taking a liveried Ford Focus ST hot hatch and Ford Ranger Raptor performance pick-up out on to the road.

Criminals in the region will find few escape routes, with the hot hatch – here tested in estate form – receiving rave reviews for its on-road pace, thanks to a 276bhp 2.3-litre engine, 5.5-second 0-60mph time and top speed of 155mph.

Meanwhile, the Ford Ranger Raptor takes the firm’s already off-road-capable pick-up truck and fits a series of upgrades that make it even more capable should those being pursued decide to leave the Tarmac. Upgrades include Fox pro shock absorbers, all-terrain drive modes and an aluminium skid plate to protect the vehicle’s underside.

The pick-up looks to be targeted at those forces that cover large areas of countryside, with Ford saying it “may prove to be the perfect tool to access some of the UK’s most rural locations”.

Both vehicles have been set-up by Ford’s Special Vehicle Preparation team in Essex, where the livery, emergency lights and sirens were all fitted.