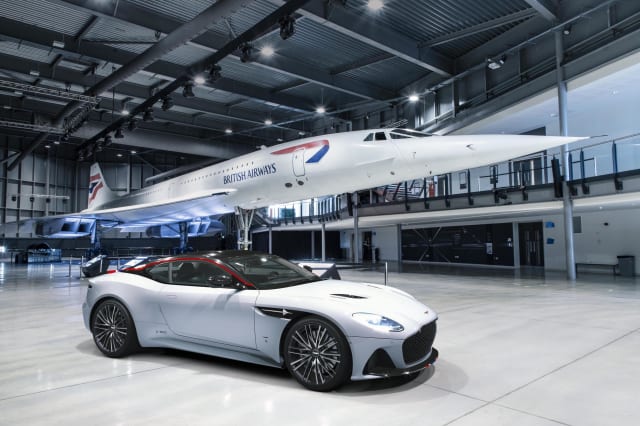 Aston Martin has introduced the DBS Superleggera Concorde Edition as the latest limited-run model in its Wings Series, which honours icons of the sky.

This example has been introduced to celebrates the 50th anniversary of the first supersonic passenger airliner taking to the skies.

Limited to just 10 examples, the DBS Superleggera Concorde Edition has been extensively personalised by the firm’s bespoke division, Q by Aston Martin. It was commissioned by Aston Martin Bristol, which is a short distance from where British Concorde were manufactured.

On the outside, there are bespoke side strakes milled from solid aluminium, a ‘Q’ wing badge, black Civil Aviation Authority identifier numbers and bespoke inspection plaques. Inside, the Concorde logo is on the front seat facings, there’s a unique Alcantara headlining with a sonic boom graphic and paddle shifters milled from the titanium used in Concorde’s compressor blades.

The model also celebrates the centenary year of British Airways, one of two Concorde operators, featuring a livery that includes the company’s colours on the roof, aero blade and rear diffuser, as well as its Speedmarque logo in chrome on the front wings.

Marek Reichman, executive vice president of Aston Martin said: “It’s only fitting that our great British sports car brand marks the achievement of the incredibly dedicated, talented and ambitious teams of British and French scientists, engineers, designers and aircraft workers who made Concorde, and supersonic air travel, a reality in our skies 50 years ago.

“Using the DBS Superleggera as our starting point, and with the support of the talented personalisation experts in the Q by Aston Martin service to draw on, we have been able to subtly and sympathetically enhance and highlight some of the car’s most notable features while preserving the elegance, style and sheer brutish road presence for which the Aston Martin DBS is rightly known.”