First drive: The Polestar 1 is a cool and dramatic GT car — but not without compromise 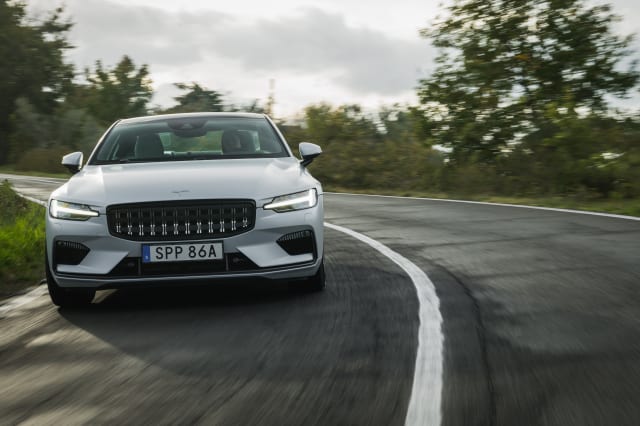 While the automotive industry is struggling to keep up with the rise of EVs – many scrambling to bring models to market to avoid being stung by huge environmental fines – this situation surprisingly provides a gateway for firms willing to innovate.

One of these companies is Polestar. It's a manufacturer that started out as being Volvo's performance arm, but it's now separated to become its own carmaker, which will merely focus on electrified models. It's worth noting that it's still heavily linked with Volvo under big owner Geely's ownership.

And here is Polestar's first model – the '1'. Bizarrely for a firm that will, from this point onwards, just launch pure EVs, this new GT car is a plug-in hybrid — but a rather clever one at that.

7 PHOTOS
First drive: The Polestar 1 is a cool and dramatic GT car — but not without compromise
See Gallery

It's hardly a surprise to see just how Volvo-like the Polestar 1 is, given its inspiration is the Volvo Concept Coupe. That show car was the first model to sit on Volvo's new Scalable Product Architecture (SPA) that underpins models like the Volvo S90, but on the '1' it's been strengthened through a carbon-fibre cross member. That material is key elsewhere, too, as the body of the model is made from carbon-fibre reinforced plastic.

The other big news is the new plug-in hybrid powertrain, with the 1's setup being completely different to other Volvos – producing 601bhp, while also offering the longest claimed electric range of any plug-in hybrid on sale today.

But among all this brilliance is one snarling concern – the Polestar 1 is only available in left-hand-drive, meaning it will be a niche, at best, choice in the UK.

Open the hood and there lies a supercharged and turbocharged 2.0-litre petrol engine, which itself produces more than 300bhp. But joining that are two electric motors, along with two batteries that offer a capacity of 34kWh – larger than some EVs.

The combination of engine and electric itself produces in excess of 500bhp, but there is also an integrated starter motor adding further performance, which allows for a maximum of 601bhp and 1000Nm of torque. We're talking supercar figures here then, and it certainly feels like that – even when carting around 2,350kg of weight. Foot to the floor in 'Power' mode and 0-60mph would be met in four seconds, and Polestar says it will reach a top speed of 155mph.

With both electric motors at the rear, it can be run as a rear-wheel-drive car, or all-wheel-drive once the engine kicks in. The gearbox of choice is an excellent eight-speed automatic transmission.

The 34kWh battery also enables the Polestar to have an impressive claimed 78 miles. And as it can also be charged with a 50kWh rapid charger (unlike many PHEVs), the battery can be topped up in less than an hour. That long electric range allows for some astonishingly low running costs – CO2 emissions of just 15g/km, and a claimed fuel economy figure of 403.5mpg.

One of the key benefits of electric cars is the seamless performance, and this is undoubtedly the key asset to the Polestar. It picks up speed at an alarming rate, and the changeover to when the petrol engine kicks is one of the smoothest of any petrol-electric model.

The stiffer chassis is also noticed – there's next to no body roll, and direct steering makes it very easy to place through the corners, with torque vectoring instantly sending power to the wheels that need it most to ensure it always feels controlled.

Quite unusually for such an advanced car, it doesn't come with electronic dampers like most cars in this class do – rather it makes use of high-quality Ohlins ones that have to be manually adjusted. In the standard factory setting, they're perhaps a bit too firm, though never uncomfortable. They can be adjusted without the need of a specialist, though we reckon it's a bit of a faff, and we imagine most owners will leave them how they came. The Akebono brakes also provide superb stopping power.

In a word, the Polestar 1's styling is sensational. The proportions are just about perfect with an extended bonnet, long rear doors and gorgeous 21-inch alloy wheels.

As we mentioned earlier, its whole inspiration is the Volvo Concept Coupe – hence why it's recognisable first as a Volvo and second as a Polestar. There's nothing wrong with that, as Volvos are some of the best-looking cars around.

But it's remarkable how close the Swedish firm has managed to get this production model to the 2013 concept – the carbon-fibre body said to allow for further scope to exactly replicate a car's design. It really is one of the best-looking cars around, and it's undoubtedly that design that will be the selling point for most buyers.

If you've spent much time in a Volvo interior, you'll see just how similar the Polestar 1 is inside to its parent brand's cars. While Polestar has added bits of expensive carbon fibre, a truly terrific Bowers & Wilkins sound system and a few more pleasing luxurious touches, the design and layout is just about identical.

It's not exactly a bad thing, as Volvo interiors are some of the best around, but there could be an element of disappointed from an owner when they realise that their Polestar has a very similar-looking cabin to a £30,000 Volvo XC40.

The four-seat Polestar 1's batteries also significantly eat into the boot space, leaving just 143 litres, which will allow for a couple of small suitcases at best. Though, of course, practicality isn't a priority. A cool touch in the boot, though, is that Volvo has left the batteries on show. "Why hide them?", was the firm's reasoning.

Given the Polestar 1 costs an eye-watering £139,000, it's pleasing just how much kit it comes with. A few equipment highlights are Pilot Assist semi-autonomous driving – something that's about unique in this class – along with Nappa leather sports seats and active bending LED headlights.

The line-up is simple, too, and aside from splashing out an additional £5,000 to have your car with matte paint, or the choice of three wheel finishes and two interior combinations, that's where the option boxes end.

That high price might seem a lot – especially when you consider that you could buy a Bentley Continental GT for not a lot more money – but this technology remains expensive, particularly with such an advanced powertrain like this.

In terms of styling, technology and performance the Polestar 1 is an absolute masterclass, and undoubtedly a superb showcase at to what Polestar will hopefully offer from future all-electric models.

But it's sadly compromised by not being offered as an RHD model (due to such low volumes and the expense of a conversion) – something that makes it deeply impractical in the UK, and also, its expensive list price.

Yet the Polestar 1 will be a fantastic indulgent purchase for those lucky enough to be able to afford it and won't be bought by those who care about it being impractical or costly. You're likely to never see one on British roads, but if and when you do, it will be just as special to lay your eyes on as it will be for the person behind the wheel.