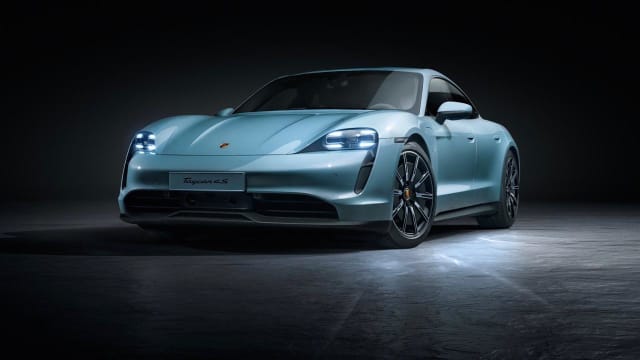 Porsche has added a new Taycan 4S to its line-up of electric sports cars.

Designed to sit underneath both the Turbo and Turbo S models in terms of outright performance, the new 4S manages to eclipse both of those cars for all-electric range.

Porsche claims that a smaller battery version will return 252 miles on a single charge from its 79.2kWh battery, though a larger 93.4kWh battery will unlock 287 miles of range – the longest of any car in the Taycan range.

It uses the same dual-motor drivetrain setup as the Turbo-badged vehicles but pushes out less power – 523bhp – because of a less potent rear motor. Even so, Porsche claims that the 4S will go from 0-60mph in under four seconds and hit a limited top speed of 155mph.

The more dynamic exterior design showcased on the Turbo models has been cooled down, with the front and rear splitters less aggressive than before. New 19-inch alloy wheels complete the package, too.

It also benefits from Porsche’s 4D chassis control and adaptive air suspension as standard, along with PASM electronic damper control.

The new Taycan 4S is available to order now priced from £83,367 prior to any UK electric car grant being applied.