First Drive: The Maserati Levante’s appeal is bolstered with a new entry-level offering 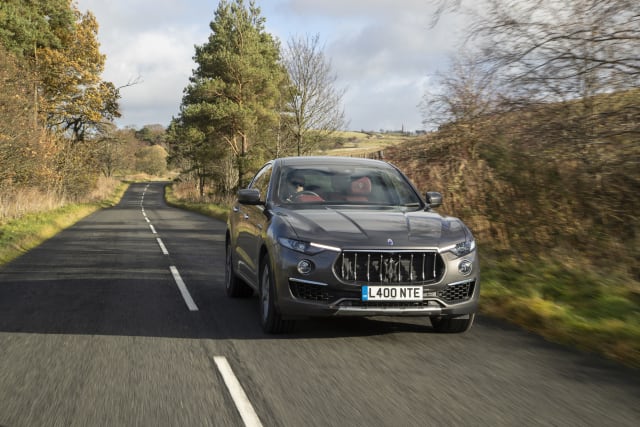 Few people could argue with Maserati’s decision to launch the Levante back in 2016. You see, though the introduction of an SUV may jar with the Italian firm’s roots in sports and supercars, the growing appetite for high-set vehicles means that the Levante made commercial sense when it arrived three years ago — and continues to do so today.

It’s why there’s now an entry-level petrol engine to make the Levante even more accessible and build on the car’s success. Believe it or not, it’s now Maserati’s most popular model, with 55,000 units sold globally since its launch. We’ve been out to see what this new ‘cooker’ model is all about.

It’s safe to say that while this new entry-level Levante provides an access point into both the range and the firm as a whole, it’s not lacking in performance as a result.

There’s still a Ferrari-derived twin-turbo V6 engine under the bonnet, and all manner of driver aids to keep things on the straight and narrow. Two distinct trim levels have been developed too – Gran Lusso and Grand Sport – the former leaning heavily on outright luxury and the latter on, understandably, sportiness.

We’re in the first of the two today, which is why our test car is decked out in high-quality leather and plenty of buttons for all those tech-savvy buyers out there.

As we’ve already mentioned, there’s a 3.0-litre twin-turbocharged V6 under the bonnet of the Levante, which holds its origins with Maserati’s friends over in Maranello. It churns out 345bhp here (with S-badged models pushing out considerably more at 424bhp), but there’s a decent slug of torque to work with – 500Nm, in fact.

It’s sent to all four wheels via an eight-speed ZF automatic gearbox, and there’s plenty of off-road wizardries to help when the Levante goes off the beaten track which, as we imagine will be the case for most cars, won’t be very often.

Performance-wise this entry V6 model punches well above its weight, going from 0 to 60mph in a snick under six seconds and onwards to a top speed of 156mph. When it comes to efficiency it isn’t the best, however; Maserati claims 23.5mpg combined, while CO2 emissions are a chunky 278g/km.

There’s a decent amount of expectation when you hop into the seat of the Levante and see that prominent trident badge sparkling away on the steering wheel ahead of you. Maserati, after all, knows a thing or two when it comes to making comfortable yet powerful long-distance cruisers, so you’d expect to the Levante to at least capture an essence of that.

To begin with, things are good. That V6 burbles away joyfully, giving all manner of character to your forward progress. The steering is well-judged too, with plenty of weight and accuracy. The ride is left wanting, however, as even when riding on air suspension like our test car, the Levante transfers a lot of the road imperfections into the cabin. They’re less obvious when travelling at speed, but for around town, the refinement isn’t what we’d expect.

Of course, a car’s design success is down to the individual, but we’d argue that the Levante is a handsome looking brute. It’s large – there’s no way of getting around that – but the various angles and curves do help to mask its outright size. The optional 19-inch alloys fitted to our car gave it plenty of presence too, while the red callipers (a £200 extra) highlighted the car’s performance too.

It’s a well-executed design, that’s for sure, and one which helps the Levante to appear as the sleeker, perhaps more understated option on the SUV spectrum.

You’d like to think that for £69,425 you’d be getting a high standard of fit-and-finish, but this isn’t entirely the case when you get inside the cabin of the Levante. The materials don’t feel as classy as those found in rival offerings, while the main displays and dials lack the clarity we’ve come to expect – particularly at this price point.

That said, the ergonomics are okay, and there’s plenty of adjustment to be found for the driver too. When it comes to practicality, the Levante does well enough to keep its head held high. Around the back there’s 580 litres of boot space which, though somewhat smaller than the load area you’ll find in cars such as the BMW X5, is still large enough to accommodate several large bags.

The Levante’s main infotainment offering is based around a central 8.4-inch display. It’s pleasingly easy to navigate, but it’s just lacking in the kind of functionality or detail that we’ve come to expect. The mapping system, for instance, does well to get you where you want to go – but it’s clunky in its orientation and doesn’t have the most high-definition readout.

Pairing your phone is simple, however, while the new central rotary controller in partnership with the touchscreen system helps to give you options on how you want to navigate the main screen. All in, there’s plenty of technology on offer here, and though the cabin materials may not be quite up to the standard set by the close-to-£70,000 price tag, the wealth of standard equipment certainly helps mitigate this.

It’s easy to understand the Levante’s success. It’s good looking, feels reasonably purposeful to drive and has plenty of kit bundled in as standard. This entry-level V6 makes even more sense, particularly as droves of potential buyers leave the idea of diesel behind and find the idea of a cleaner petrol more palatable.

It may not quite match its rivals for outright interior quality, but few will notice the smaller foibles. Those who drive the Levante for the first time will likely be swayed by that burbling exhaust, its sleek design and the competent way in which it clings on around bends – and that’ll likely be more than enough to seal the deal.

How to change a wheel on your car