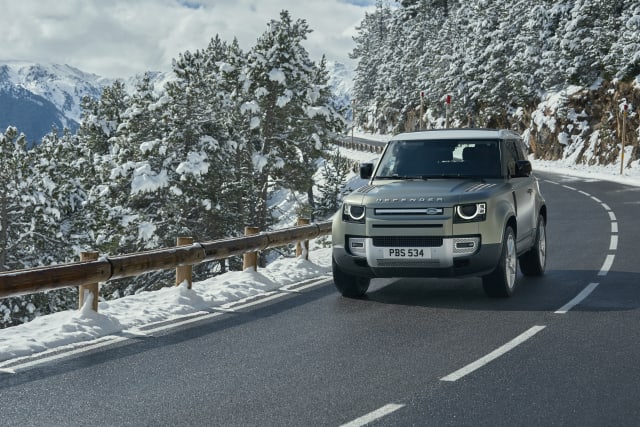 After years of concepts, rumours, teaser images and countless leaks, Land Rover has at last revealed the new Defender.

The original Defender went out of production in 2016, with a dedicated off-roader-sized gap in the British firm's line-up since then.

This new version tackles that and is instantly recognisable as a Defender thanks to its boxy silhouette. Its design takes on a modern look though with enclosed LED headlights, softer details and a distinctive rear light design.

It looks set to be just as capable as its iconic forefather, if not more thanks to some clever new tech. Underpinning the off-roader is a new 'D7x' platform, based on an aluminium monocoque, which Land Rover says is three times stiffer than traditional body-on-frame chassis setups.

Debuting on the new Defender is 'Configurable Terrain Response', which allows vehicle settings to be fine-tuned to cope with any particular surface — though pre-set options are there for beginners to off-roading too. The firm's 'ClearSight' technology features as well, which utilises a camera setup to display the ground underneath the bonnet on the central screen.

A spartan approach is taken inside the car. Structural elements are exposed — both to save weight by doing away with materials that would normally cover these as well as showcase its rugged roots — while rubberised flooring shows the function-over-form approach Land Rover is taking.

It's not entirely a blast from the past, though. A touchscreen infotainment system features and utilises over-the-air software updates to remain futureproof.

Available in short-wheelbase 90 or long-wheelbase 110 guises, the British off-roader is capable of seating seven in its largest form (six in the 90). Folding the rear-most row results in 1,075 litres of boot space — rising to 2,380 with the middle row flattened. Those looking for an open-air experience can opt for a fabric roof, too.

Powertrain choices at launch consist of two petrol options — a six-cylinder and four-cylinder — along with two four-cylinder diesels. Petrol offerings also utilise mild-hybrid technology, with a plug-in hybrid unit set to join the range next year.

Five trims will be offered for the Defender — namely S, SE, HSE, First Edition and Defender X. Pricing starts at £45,240 for 110 models, with standard equipment across the range including LED head- and taillights, 18-inch steel wheels, a heated windscreen, a 10-inch screen supporting both Apple CarPlay and Android Auto, cruise control and a 3D 360-degree camera system.

Order books are set to open imminently for the reborn Land Rover Defender 110, with first deliveries expected in December. 90 variants are due mid-2020, with pricing expected to begin at £40,920.