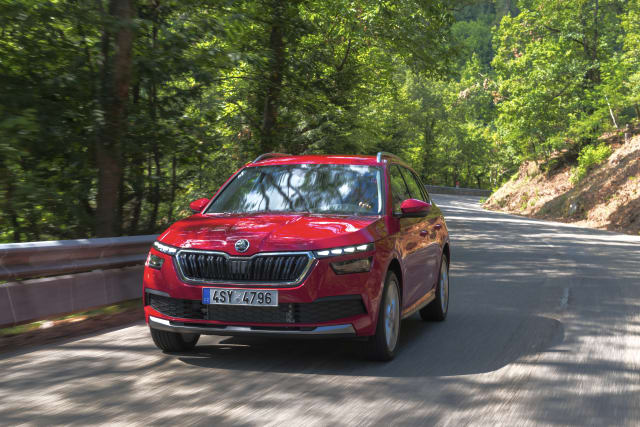 In case you hadn’t noticed, SUVs are big business now. Hatchbacks and small estates continue to be shunned in favour of compact off-roaders and crossovers – and Skoda is a company well aware of this. It’s why it has now bolstered its SUV line-up with this – the new Kamiq – which sits alongside the Karoq and Kodiaq in the firm’s range of high-riders.

It’s based on the same underpinnings as the Volkswagen Polo and Seat Arona. A compact platform, that’s for sure, but one that affords a fair degree more interior space than its dinky proportions would lead you to believe.

As we’ve mentioned, that compact platform underpins the Kamiq, and you’ll find many other aspects of the car influenced by Skoda’s Volkswagen Group owners too. The benefit of this is that there are many high-end functions now available on the pint-sized Czech machine, such as lane keep assist, front assist with city emergency braking and predictive pedestrian protection too.

There’s plenty of interior tech on offer here too – though we’ll cover this in more detail later on – while Skoda has fitted systems such as Apple CarPlay and Android Auto to ensure that even the most tech-savvy aren’t left disappointed.

Powering our particular Kamiq is a 1.0-litre turbocharged petrol engine putting out 113bhp and 200Nm of torque. Despite its compact size, this powertrain can push the Skoda from 0 to 60mph in a snick under 10 seconds, and flat-out you’ll be doing a heady 120mph.

But of course, efficiency is further up the agenda here than outright performance, so it’s good to see that the Kamiq can return up to 53.3mpg while emitting between 120 and 150g/km CO2, depending on trim. Here, our car utilises a six-speed manual gearbox, though a DSG auto is available too.

Skoda believes that this engine is likely to be the most popular, though it is joined in the range by a larger 1.5-litre petrol, and a 1.6-litre turbocharged diesel too.

Given that the Kamiq rides considerably higher than the Scala hatch, you could forgive the dinky SUV for wallowing a little in the bends. However, this isn’t the case. When pushing on, the Kamiq handles admirably, managing its taller ride height impressively well. The ride quality is also superb – no Skoda-related pun intended – and it’s helped by a distinct lack of road noise, though there’s a little bit of wind chatter.

The steering is relatively lifeless but accurate, and the 1.0-litre engine under the bonnet does a decent job of getting the Kamiq up to speed in good enough time – though it can be a little vocal under hard acceleration.

Our car rode on standard springs; Skoda now offers selectable dampers on the Kamiq, giving you the option of firming up the ride for a more ‘sporting’ feel. In truth, we’d be happy without the option – the Kamiq rides just fine as it is and firming it up seems a little unnecessary.

You could argue that the appearance of the Kamiq is that of the larger Karoq albeit put on a hot wash, but you can’t argue with Skoda’s approach here. It has managed to give its cars a distinct ‘face’, and there’s a definite lineage between the SUVs ranging from the Kamiq up to the Kodiaq which helps to give the line-up a far more ‘family’ orientated look.

It’s a smart design, though, with squat, boxy proportions combining with chrome accents and gloss black detailing to give a well-rounded overall appearance. The smallest 16-inch alloys could end up looking a little lost in the arches despite the car’s compact size – though we’d expect that most buyers will opt for the largest 18-inch versions.

Despite being on the same platform as the pint-sized Seat Arona, the Kamiq has a long wheelbase which means it’s able to offer more interior space. It’s noticeable, too; sit in the back and there’s plenty of leg- and headroom, even for taller passengers. Our car came with a panoramic sunroof and – bucking the trend you usually find with this option – it didn’t impede headroom at all.

Up front, things are light and airy. There are some cheaper plastics to be found, but then this is to be expected of a car in this segment. The top of the dash has been trimmed in a soft-touch rubberised material, though, and this really does help lift the overall perception of quality in the cabin.

When it comes to boot space, there’s 400 litres of seats-up room available, and this can be boosted up to 1,395 litres by folding the rear seats down. It’s impressive – a Volkswagen Golf can only offer 380 litres, for context.

All cars get a version of infotainment system, though the screen’s size varies depending on specification, going from a base 6.5-inch unit right the way up to 9.2 inches. A new built-in eSIM means that the Kamiq’s satellite navigation can be consistently kept up-to-date, and also allows drivers to access Skoda’s mobile online services.

As mentioned, Apple CarPlay and Android Auto are included as standard, which helps to integrate a smartphone into the car’s system via a cable – or wirelessly via the Wireless Smartlink optional extra. And, as we’ve seen on other cars released recently, the Kamiq packs USB-C ports – so if you’re using older USB connections, you’ll need to buy an adaptor.

There’s really no reason why you wouldn’t be happy to find yourself with the keys to a Kamiq. It’s arguably one of the most practical and spacious cars in the segment, and it’s backed up by willing driving characteristics too. Though prices haven’t been released yet, we’ve been tipped off that mid-range SE cars fitted with the 1.0-litre engine we’ve driven here will come in at just under £20,000, and given the amount of tech on board, overall build quality and sparkling driving dynamics, that seems quite the deal to us.