First Drive: BMW’s 330e plug-in is a hybrid for every situation 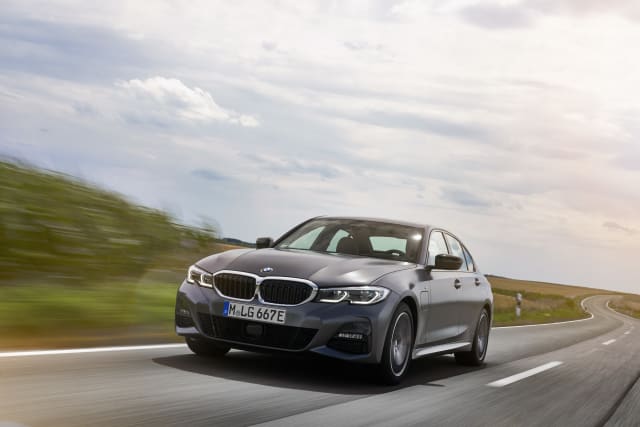 BMW has been a mainstay in the saloon segment for many years now, offering rock-solid build quality with plenty of driver involvement to boot. And its 330e hybrid has been a popular combination of those core values, with hybrid efficiency thrown into the mix.

Now in its fourth generation, the 330e promises plenty of performance but with the low emissions and greater efficiency you can often only get from a plug-in. Let’s see how it gets on.

The biggest update here is the hybrid powertrain, but we’ll look at that in more depth shortly. Elsewhere things are remarkably, well, 3 Series-y. There’s little to denote this car as anything out of the ordinary when it comes to exterior styling, save for the additional filler cap over the charging point, as well as the ‘e’ badging on the back.

Inside, it’s bread-and-butter BMW, meaning plenty of technology and a great attention to build quality, too. The manufacturer hasn’t messed with the 3’s formula much and there’s good reason for that – it just works.

It’s underneath the bonnet where things get a little less ordinary. A fairly standard 2.0-litre turbocharged petrol engine kicks things off, and it’s coupled to an electric motor which combined push out a decent 289bhp and 420Nm of torque. It’s enough to push the 330e to 60mph in 5.7 seconds and onwards to a 143mph top speed. A new function called XtraBoost draws on extra power when selected, pushing an additional 38bhp to the wheels when needed.

But of course, performance isn’t the name of the game here – though the 330e does have a decent amount of it. No, economy is what the 330e is angled towards, which is why it’ll return a claimed 138mpg combined while emitting just 39g/km CO2. BMW claims that it’ll run for 41 miles on electric power alone, too. And when it comes to charging, the manufacturer says it’ll go from 0-80 per cent charge in around 2.5 hours via a 3.7kW charge.

Select drive on the eight-speed automatic transmission and the 330e eases away effortlessly and completely silently. It’s a feature we’ve come to love about hybrids, as it makes around town driving and low-speed journeys a little more relaxing than usual. The ride is good, and the steering is well-weighted without being overly heavy.

There’s not too much indication behind the wheel of the added weight that comes to the 330e as a result of its batteries, and this means you can have just as much fun with it as you would at the helm of a traditionally-powered 3 Series. One of the more obvious characteristics of the plug-in is its refinement; it’s brilliantly hushed around town, and it’s still impressively quiet when up to speed, too.

The latest-generation 3 Series looks sharper than ever, with neat design upgrades which have helped to move the game forward compared to the previous-generation 3. It’s a great looking car, and it’s the same story with the 330e. The charging port is neatly located ahead of the front wheels, and save for that things look pretty much standard 3 Series.

Would we like some more hybrid-focused styling touches? It wouldn’t be fitting in this segment. After all, the 330e is being pitched towards business drivers who want a car which is efficient, comfortable and not too shouty. So the 3 Series, with its lack of ‘look at me’ designs, is right on the money – in our eyes, at least.

Again, it’s a similar story in the 3’s cabin. There are some hybrid-specific driving mode buttons beside the gear lever, and the main display ahead of the driver relays information such as charge levels and remaining range – but save for these, it’s much like the regular 3 Series inside. That means a spot-on driving position, with plenty of adjustment through the steering wheel and seat.

There’s a good amount of room in the back, too. Even taller passengers should have enough space to stretch out and get comfortable, while the seats themselves have plenty of support. When it comes to boot space there’s 375 litres, which is a fair bit down on the 480 litres you’ll get as standard on the diesel and petrol-powered versions.

Our test cars came in M Sport specification and, as well as being likely to be the most popular trim level, it’s packed with a wealth of standard equipment including 18-inch dual-spoke alloy wheels, lowered sports suspension, adaptive LED headlights and full leather upholstery. In short, there’s plenty of kit.

And when you consider that the 330e starts from £37,875, it makes this even better value for money. We’ll admit that just shy of £40,000 is still a lot of money for a car, but given the 330e’s potentially low running costs and excellent build quality it’s better value than most.

The 330e is going to be a big hit for those drivers to who low emissions are key. Fortunately enough it doesn’t come with too many downsides; there’s plenty of performance, brilliant refinement and good handling too. Throw in the excellent build quality, and it’s a well-rounded package. It’s likely to be a big hit with fleet users, and for those on shorter trips or who frequent cities and towns more often, the 330e makes a great deal of sense too.