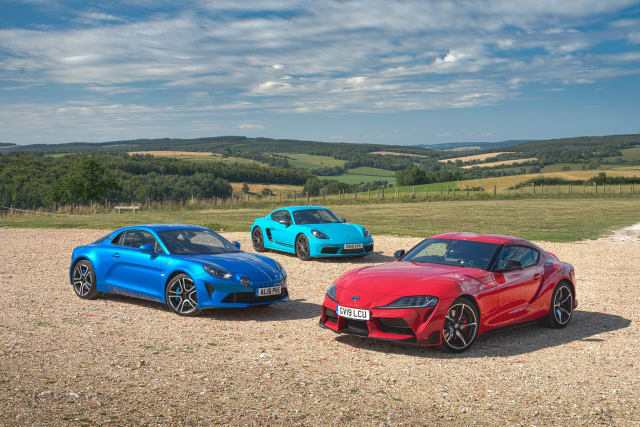 In terms of rivalries, we’ve got a pretty big one for you. In the battle for the two seater sports cars, one pair have been toe-to-toe for some time — the Porsche Cayman and the Alpine A110 — however, we’re throwing a newcomer into the mix, in the shape of the all-new Toyota Supra.

But does the new Supra, packing BMW-sourced power and technology, have what it takes to come out on top against the revered Alpine and Cayman? We’ve headed to the undulating country roads around Goodwood to find out…

As we mentioned, the biggest newcomer to the party here is the Supra. Sharing much of its underpinnings with the BMW Z4, it has been claimed that this latest Toyota sports car isn’t a ‘proper’ Supra, but with well over 300bhp and just rear-wheel-drive, we’d argue that it’s got more than enough on its side to wear the famous badge.

Then there’s the Porsche. The Cayman’s boxer engine has been a source of controversy for some time, given its departure from flat-sixes as usually favoured by the Stuttgart-based company. The T version adds lightness, with a stripped out feel and – as a bonus for keen drivers – a six-speed manual gearbox.

Finally, we come to the Alpine. When the A110 first arrived, there was discontent surrounding how effective it would be on the UK’s roads, and whether its Renault-sourced powertrain could do the overall package justice. It’s since become clear that the A110 is one of the most accomplished sports cars on sale today — and a real car to beat.

We’ve got a myriad of powertrains to speak of here, but all share a common trait — turbocharging. The Porsche’s 2.0-litre, four-cylinder turbocharged petrol may be a departure from Porsche engines of old, but 296bhp and 380Nm of torque means it’s got enough punch to play with the big boys. Mid-mounted, it sends power to the rear wheels through — in our test car’s case — a six-speed manual.

The Alpine, meanwhile, drops under the Cayman in terms of engine capacity — just 1.8 litres rather than the Porsche’s two — and with 249bhp and 320Nm of torque it falls under both cars here in terms of outright punch. But bear in mind that this is a car tipping the scales at just 1,103kg – so the performance figures only tell half the story.

The Supra’s 3.0-litre turbocharged straight-six is a bit of a bruiser in comparison to the other engines here. Its 335bhp and 500Nm of torque, driven to the rear wheels through an eight-speed automatic gearbox, demolishes the figures put out by the Cayman and A110 — but it’s a heavier car, remember.

Of course you can throw numbers around all you like, but the nuts and bolts of a sports car is the experience behind the wheel. And my, do we have a selection here.

It’s worth saying right off the bat that the Supra feels by far the quickest here, and given its claimed 0-60mph time of just around four seconds, compared to 4.3 in the A110 and 4.5 in the Cayman, that’s to be expected. Give the throttle pedal a decent prod and the softer suspension of the Supra is immediately noticeable as the whole car rears back before firing forwards. The engine note is smooth and quality-sounding, if lacking in drama.

The steering is quick, but not massively brimmed with feel – it means that even though it’s a sharp car to pilot through the bends, it can’t quite reward the driver in the same way as the other two here. However, that relatively squidgy spring rate does mean it’d be the go-to choice for longer journeys.

It’s in sharp contrast to the drive you’ll get out of the Cayman T. Boy, does Porsche know how to engineer a connection between driver and car, with the Cayman’s spot-on driving position, perfectly weighted steering and mechanically pleasing gearshift combining into a car which gives back as much as you can put in. There’s balance too, and though the Boxer engine may not have the sweet-sounding exhaust note of the old car, you can’t fault its effectiveness.

But then you get in the A110 and things go one step further. The steering feedback is the biggest boon here; it feels close to an unassisted rack, and it means that you have the confidence to exploit the chassis when corners come a-knocking. There’s a small degree of turbo lag from the engine, but keep the unit on boost and it’s effective — and you get excellent whistles from the turbocharger as you do, too. Alpine has also nailed the suspension setup for UK roads; it’s soft enough to take the edge off the surface, but not lazy enough to cause the A110’s body to loll around.

How do they look?

A car’s looks are, of course, quite subjective. However, it’s worth highlighting the cars which naturally drew people towards them during our day of testing.

In short, the Alpine was the one that people made a beeline for. Wherever it was parked, passers-by seemed to gravitate towards it. It could be because it remains a rare sight on UK roads, or that you’re unlikely to see anything else quite like it out and about. The striking blue exterior shade helps no end.

After that, most members of the public would be asking questions about the Supra. It was agreed between us that the Toyota’s design is a striking one, with its big haunches and double-bubble roof giving it plenty of presence. Even though there is the beating heart of BMW under the bonnet, the Supra disguises it well.

And the Porsche? Well despite being finished in look-at-me Miami Blue, the Cayman T didn’t get nearly as many glances sent its way as the other two in our trio. That doesn’t stop it from being a beautifully proportioned car, but against the sharp lines of the Supra and the out-there looks of the A110, it’s just not as exciting.

All three cars here follow a two-seater layout, so you’ll find a snug cabin, relatively limited storage space and a driver-focused dash shared between the three. However, the trio do go about things slightly differently elsewhere.

The Porsche’s cabin is an ergonomic wonder, with plenty of adjustment via both the steering wheel and seats. Though it’s starting to show its age somewhat, you can’t fault the cabin’s overall build quality – while the circular steering wheel (as opposed to the flat-bottomed versions favoured by most new cars today) feels great to use.

And though the exterior of the Supra may be far away from a BMW, the interior is anything but. The switchgear, heating and ventilation controls and infotainment system are all straight-through Munich, while the seating position feels a touch too high for the car. There’s also not that much room to rest your left leg when on the motorway.

The Alpine loses out immediately with its fixed-back seats which, though comfortable, can’t be adjusted for height. Luckily, they’re just low enough — though we’d maybe like an inch or two more drop. Overall cabin quality is the worst of the three here; the Renault-sourced plastics and buttons don’t feel anywhere near the same level as the Porsche or Toyota equivalents.

Each car has been laden with tech, and even the lightweight Cayman T still has its infotainment system intact — it’s usually removed as part of the weight-saving package, but can be optioned back in at no extra cost. Luckily it’s a breeze to use, and the touchscreen itself is responsive and sharp to use.

The Supra’s system is almost as simple to operate, but then we’d expect that given its BMW origins. The graphics are clear, and there’s the option of accessing menus via either the touchscreen or a rotary controller dial. Both are user-friendly, with the dial a handier access point when you’re on the move.

In a similar vein to the cabin in general, the Alpine’s infotainment system is the weakest of the three. It simply can’t offer the same level of usability, and its graphics feel dated too. Even pairing a phone is a chore — something quickly dispatched by the other two here.

It’s a tough call, this one. What needs to be remembered is why you’ll be buying one of the cars on the list. Planning on using your car for long journeys, but want to exploit the twisty roads at either end? For that, we’d argue that the Supra is the one for you.

Need a car which will deliver day-in, day-out come rain or shine? That’s where the Cayman T will play to its strengths, thanks to its ease of use and rock-solid build quality, But make no mistake, it’ll happily exploit a technical b-road just as easily as it’ll bowl to the local supermarket.

But want a car that’ll stick an immovable smile on your face each and every time you’re behind the wheel? That’ll be the Alpine A110. Interior foibles aside, the Alpine is the one to go for if you want an out-and-out, maybe-I’ll-stay-out-for-one-more-hour sports car. And as far as sports cars go, that’s what it’s all about.

The basics every car photographer should know