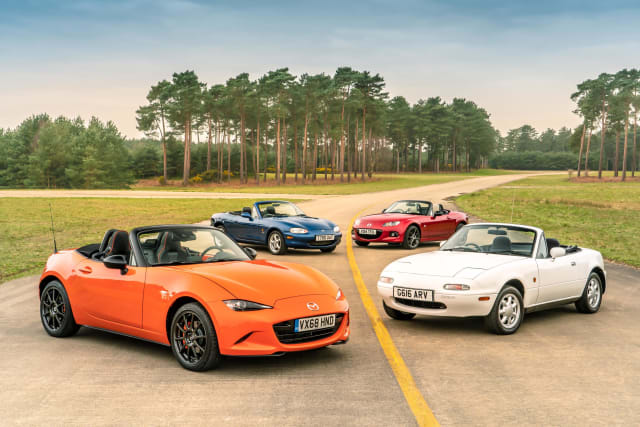 It’s easy to see how the Mazda MX-5 became such a huge seller – affordable top-down motoring in a fun-to-drive package isn’t easy to come by.

However, what can’t be explained through looking at numbers on a spreadsheet is just what caused the Japanese roadster to become a cult icon. Even today, in its fourth generation, the MX-5 inspires its owners to fall in love, while others still worship the original models.

First revealed in 1989, the original MX-5 set out to prove that the world wanted an affordable convertible sports car experience, at a time when even Mazda’s bigwigs needed a bit of convincing.

Fortunately, they were swayed, and the roadster hit the market to a rapturous reception. Looking at the performance figures now, they don’t make for overly exciting reading – the 1.6-litre, four-cylinder engine in our test car makes just 114bhp, but thanks to a weight of just 955kg, 0-60mph takes a respectable 8.3 seconds. A 1.8 with 130bhp was also available.

Straight line sprints are the antithesis of what this car is about, though. Its character comes from its lightweight, nimble nature, further aided by the front-engine, rear-wheel drive layout.

With the roof thrown back and the high summer sun roasting my arms, it’s immediately clear why 90s motorists fell in love. As the road curves between tall trees and the warm air blusters around the cabin, occasional shade offering welcome relief from the heat, I can’t help but smile. The MX-5 responds immediately to your steering inputs and darts through turns eagerly.

Despite its relative lack of power, the engine never feels lethargic, and is always eager to rev with a raw accompanying soundtrack. Compared with the sanitised, safety-conscious models of today, it’s refreshingly simple.

The original is always the benchmark, and so it was important to get that done first to give myself some context. That’s especially important here, because one of the few criticisms levied at the MX-5 over the years is that later models lost the lightweight, fun and fizzy performance of the early car.

So, as I jump into the second-generation model, I’m intrigued to see how it compares back to back, and the early signs are good. This is a 1999 model in Innocent Blue Mica, its 1.8-litre, four-cylinder engine making 138bhp.

However, on paper it’s barely any faster than the original, because that modest power hike is cancelled out by an increase in weight to 1,100kg.

Out on the open road, though, that extra weight is almost welcome. At just over a tonne it’s still incredibly light, and coupled with almost a decade of engineering progress, it feels much more sure-footed on the bumpy B-roads.

What you lose in sheer urgency of response, you make up for in increased confidence, meaning it’s easier to carry more speed through a corner without losing any of the thrills. Purists might bemoan the weight gains, but to an outsider, the second-generation still retains that unique purity of performance.

The jump from second to third generation feels massive. The styling looks much more modern, the metallic paint shimmers in the midday sun, but most of all, the interior is night and day better than its predecessor – though we are comparing a late third-gen with an early second-gen.

Again, some purists and MX-5 aficionados might scoff at this car, which is heavier again at 1,115kg, but remove emotion and it’s objectively better in almost every way.

Beneath the curvy bonnet sits a 2.0-litre, four-cylinder engine with 158bhp, which aids a 0-60mph time of 7.7 seconds and a top speed of 136mph. In everyday driving, thanks to the improved interior and this 25th anniversary edition’s hardtop, it’s quiet and comfortable.

But put your foot down and there’s enough fizz from the engine to spin the speedo round to the fun numbers, with this third-generation model being the most confidence-inspiring of the lot.

However, it’s also the least fun. While the second-generation model manages to marry progress with the spirit of the original, this third-generation model feels a bit too soft. A bit too numb in its responses. It’s capable, but it lacks that sensation of oneness with the car, where every firing of fast-twitch muscle fibre translates directly to the car.

If it wasn’t the hottest day of the year, I’d grab my anorak, because I’ve become one with the nerdy forum dwellers…

So, here we are, back in 2019 with the latest iteration – a 30th anniversary special edition. Driving this immediately after having my own journey through three decades of MX-5 is almost poetic.

The latest generation was introduced in 2014, with Mazda keen to show it had gone back to its roots, benchmarking the new model against the original.

The key here is weight – impressively, at less than 1,100kg, the 2.0-litre we’re testing is lighter than the second generation, while the 1.5-litre entry level model dips just below a tonne in soft top form.

The 2.0 has a healthy 158bhp, just like the third-generation car, but because it’s so much lighter, it’s much quicker to respond to your inputs. It’s clear that Mazda’s engineers spent a lot of time instilling the original’s character into the new model, while still retaining the comfort and assuredness of later models.

Driving multiple generations of such an iconic car in one sunny afternoon was a great way to properly understand just how and why these cars wormed their way under people’s skin. And the fact Mazda listened to criticism to build a new version that’s a highlights package of its predecessors should be commended.