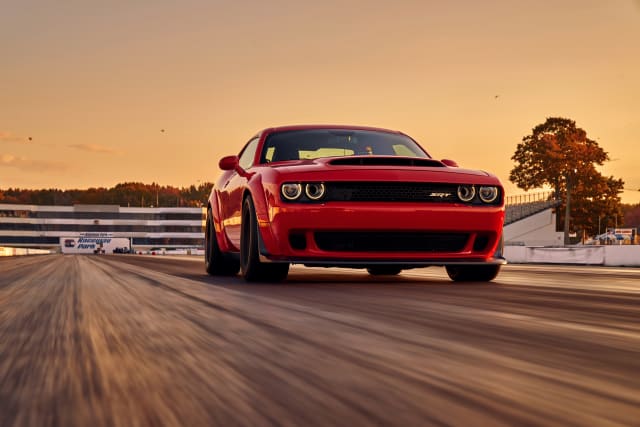 The main thing that attracts humans to speed is adrenaline; the rush of watching the scenery fly by at an ever-faster rate. It’s because of this that those who seek this thrill are often called adrenaline junkies, or dare devils.

Not only is the past time of pursuing pace an adrenaline-fuelled one, but it also rather dangerous. And as a result, extreme cars are often named to add a sense of gravitas, often citing the Land of Lucifer; if race tracks are your heaven on earth, hitting the barriers is probably hell, after all.

These are the best cars named after the Devil, his grounds and all of his friends.

When a new wave of muscle cars arrived in the mid-2000s, there were quite a few enthusiasts who felt they simply weren’t powerful or raw enough. Dodge’s Challenger was one of the cars that received critique, which the boffins at the brand’s performance arm SRT clearly saw as a gauntlet.

Both the Challenger and the Charger received a 697bhp, supercharged V8 for the ‘Hellcat’ models, perhaps the most extreme performance muscle cars of all-time… for a while.

Lamborghini’s cars always seemed a little possessed, lairy and demonic given the chance, so why not skip the pretence and name one after the devil?

The 1990 Diablo – devil in Spanish – was the result of this line of thinking, and it has since gone down as one of the most brutal, off-the-leash Lamborghinis ever built; a title it is unlikely to lose any time soon.

Who’d have thought that a little over 25 years later, the company naming cars after the devil would supply a Huracan to the Pope?

If you’ve ever so much as seen the first five seconds of a horror movie trailer before you can skip the ad on YouTube, you’ll know that the number 666 has some satanic connotations.

Lister decided that this steroidal take on the Jaguar F-Type should not only be branded with that number, but also pack a 666bhp punch.

If you’re hitting the road in one of these, maybe pack a cross just in case.

Ah yes, the end of days. If you’ve ever wondered whether you’re destined for heaven or hell, rapture will apparently be the day you find out.

When Radical decided to take its track day prowess and put it into one of the year’s most extreme road cars, perhaps it was only natural to name it after the day of reckoning? Either way, it’s expected that the Rapture will live up to its name, offering edge of seat thrills on road and track.

It takes a brave engineer to look at a 700bhp muscle car and say “I think more can come out of this”, but clearly someone at SRT thought exactly that.

The result? The 840bhp Challenger Demon, the most notorious grim reaper for tyres to come from a production line in many a year. Thanks to a wide body kit, the Demon is as imposing as it is loud and fast; expect your kids to check under the bed for this one at night.

The team at Hennessey are now known for sailing against the wind, and squaring up against some of the world’s top manufacturers.

After Dodge came out with the Demon version of the Challenger, Hennessey fired back with a tuned Chevrolet Camaro ZL1 designed to eclipse, surpass and dispose of the machine from SRT, with almost 1,000bhp on tap.