First Drive: The Mercedes-AMG A45 S arrives to shake the hot-hatch segment up 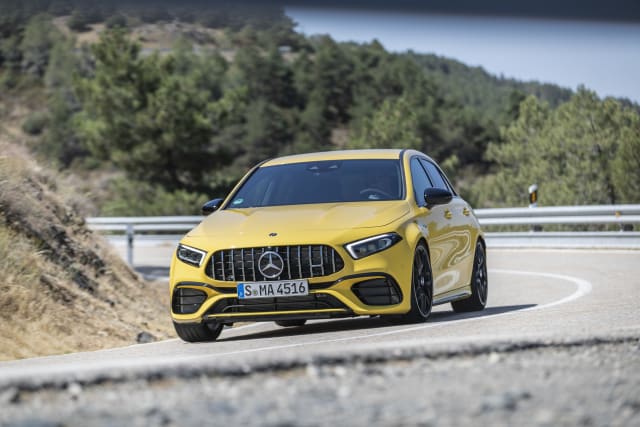 This is the fire-breathing new Mercedes-AMG A 45: the most powerful A-Class on sale today, and one of the fastest hot hatches on the market too. Now in its second generation, the A 45 found plenty of fans the first time around; seduced by its premium badge and preposterous (at launch) 350bhp power output.

Since the previous generation’s 2013 launch though, rivals have got more powerful and – crucially – more engaging to drive too. Can this latest generation show them what’s what?

Everything, effectively. Based on the new fourth generation A-Class launched last year, not much has been carried over from the old car. Its engine, though the same size as before, has been totally reworked. It still has four-wheel-drive, but a new clutch-based rear differential – similar to that on the Focus RS – means it’s able to pull off party tricks like a ‘drift’ mode.

The new car also gets Mercedes-Benz’s latest technology too, including the MBUX infotainment system that debuted on the A-Class, complete with augmented reality sat nav and a clever (if slightly too eager) voice recognition feature.

As with the previous A 45, this one gets a 2.0-litre turbocharged petrol, now with two different power outputs depending on trim level. The ‘normal’ A 45 gets 381bhp – a shade more than later versions of the old car – while the A 45 ’S’ gets an obscene 415bhp.

Each engine follows AMG’s traditional ‘one man, one engine’ principle, with every one adorned with a signed plaque from its builder. You can see why the craftspeople of AMG would be proud, too: this is a truly spectacular engine.

To extract this kind of power from a 2.0-litre is one thing, but to make power delivery as linear and turbo lag-free as it is here is quite something else.

Around town in comfort mode it’s as placid and smooth as any other petrol-powered A-Class – moreso, in fact – but stretch the A 45’s legs a little and you’re rewarded with brutal, unrelenting acceleration and a wave of torque.

With so much power on offer and aggressive looks to match, you’d expect something special from the A 45’s chassis too. Thankfully, those clever AMG engineers have more than delivered.

Starting with the basics, everything feels just right: steering is quick without being frenetic, the brakes are progressive but with plenty of bite, and ride comfort – in our car with adaptive dampers at least – seems very impressive for a car of this ilk too.

The real revelation here is the changes AMG has made to the four-wheel-drive system. A new active rear differential – with an electronically-actuated clutch on each side – can push as much as 100% of the rear axle’s power to either wheel.

The result of that is an incredibly nimble-feeling car indeed: one that pushes you into every corner and – with a little encouragement – is happy to playfully slide too. Think of it as a well-sorted rear-wheel-drive car with added traction and you’d be about right.

Unlike its larger AMG brothers and sisters too, the A 45 doesn’t feel like the big brute of the family: it’s lithe, well balanced and despite the performance on tap, not intimidating behind the wheel.

As with Ford and BMW before it, Mercedes has seen fit to give the A 45 a ‘drift’ mode too – enabled with a complex combination of button and paddle presses. We weren’t able to try this first hand, but if nothing other than for performance car bragging rights it ticks the box.

AMGs aren’t generally masters of subtlety, and the A 45 is no different. Wide front and rear bumpers with extra air intakes, a rear diffuser and quad exhaust pipes are a pretty good indication as to the AMG’s prowess. UK cars get even racier bits as standard: an ‘Aerodynamic Pack’ consisting of extra fins ahead of the front wheels, and a rear boot spoiler that wouldn’t look out of place on a touring car.

While the outside is very much all show, AMG has left the A-Class’s interior relatively intact. That’s no bad thing – it’s an attractive and well-made place to spend time, with plenty of pleasant touches and a classy feel.

The A 45 does get a few garnishes though: the most obvious being an AMG-badged steering wheel with some extra toggle switches. It does the job, but said switches – which have integrated screens and control driving modes and exhaust loudness – feel flimsy and like a bit of an afterthought.

Still, that’s a minor niggle in an otherwise very pleasant interior – and one that’s a much nicer place to spend time in than you’d expect for a performance-focussed car.

Pricing and specification for the UK is still to be confirmed, but we’d expect the usual Mercedes rules to apply here: plenty of kit available, and most of it optional.

As with the standard car, there are plenty of ways to spend your cash: a 12-speaker Burmester stereo, larger screens for the MBUX infotainment system, augmented reality sat nav and so on.

There’s also an ‘AMG Track Pace’ data logging system for use on track days, should you wish to stretch the A 45’s legs. Using GPS, it can plot your racing lines on a circuit map – with famous tracks like the Nurburgring pre-installed.

The A 45 is a fabulous all-rounder: with crisp and rewarding handling backed up by outrageous levels of performance, but more than happy to settle down into stop-start, day-to-day driving.

What’s harder to rule right now is whether all that talent will come with a high price, and whether a standard A 45 – devoid of options like adaptive dampers, and that extra 34bhp – can strike the same balance.

Nonetheless, specified in the right way, the A 45 is a very talented car indeed, and one that deserves to be at the top of the shopping list for anyone looking for a compact performance car.