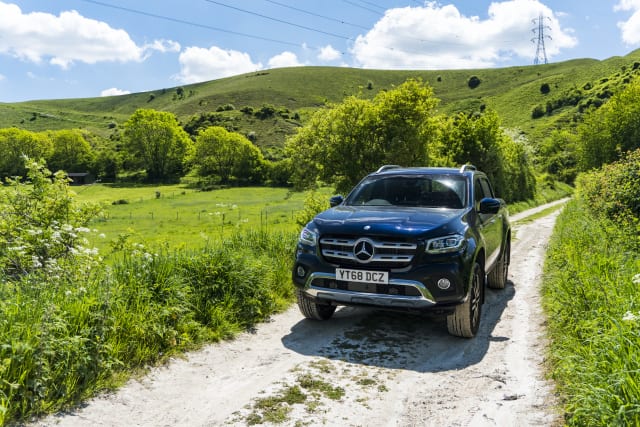 We’ve been living with the X-Class for a little while now, and our experiences with the big premium truck have been wide and varied.

I’m rather lucky in that part of my job sees me driving all manner of cars each week to review, which does mean that I’m often away from YT68 DCZ for longer than I’d like.

But returning to the Mercedes is always a welcome thing indeed. It’s comfortable, for starters, while its imposing go-anywhere character is hard to ignore. And whereas the basic charm of the smaller, less costly X250 was good, it’s hard not to be swayed by the X350’s silky V6 engine and long list of standard equipment.

The powertrain dominates the whole package. It’s left many a hot hatch driver wide-eyed at the lights, utterly confused by how a massive pick-up truck can outdrag most traffic. It never fails to entertain, even around town.

But as a result of that, fuel economy does take a dive. It’s all too tempting to use the truck’s wealth of torque and power, which is probably why I’ve been seeing consumption figures in the high teens at times, though on longer journeys 30mpg is plausible. It still means that I spend a lot of time at the pump and the X-Class, with its large fuel tank, is costly to fill.

Could I recommend one if you’re in the market for a standard SUV? Not particularly. I’m aware that many people are switching to pick-up trucks (mainly for the company car tax benefits they bring) but they’re simply not as comfortable nor as refined to drive as a big off-roader. Compare the X-Class to Mercedes’ GLE, for instance, and the difference is night and day.

Larger SUVs simply ride better because, well, they’re designed primarily for the road. The X-Class isn’t, and though it does have upgraded suspension, it’s still not as competent as SUVs on tarmac.

It’s certainly one of the best of the bunch, however, with only the Volkswagen Amarok rivalling the X-Class for both performance and driveability. Relatively light low-speed steering helps the Merc to feel more maneuverable than you’d expect, though its large size does mean parking takes a lot of effort. I’ve frequently found myself parking at the other end of the car park just to make things easier.

The 360-degree view camera is a big bonus on this top-spec truck, however, as it does help to make positioning it a little easier. It’s still quite the task, mind you.

It always feels ready for an adventure, does the X-Class. Recently it was used by some of my video camera-wielding colleagues for a shoot, and apparently it fill the bill rather well. I’d argue that the covered load area is a must-have for jobs like this, because it helps keep things (such as thousands of pounds worth of video equipment) secure and dry. The high level of the bed itself also makes loading and unloading larger items a lot easier – though if you want to push things to the back of the bed it’s often better to jump in yourself. To get them out, it’s sometimes a necessity.

YT68 DCZ is going back to Mercedes soon, and I’ll admit I’ll be sad to see it go. In truth, I haven’t bonded with it quite as much as the lower-spec X250 that preceded it; it’s a weird one, but the upstart, bare-bones model got under my skin a little more than the snazzy X350.