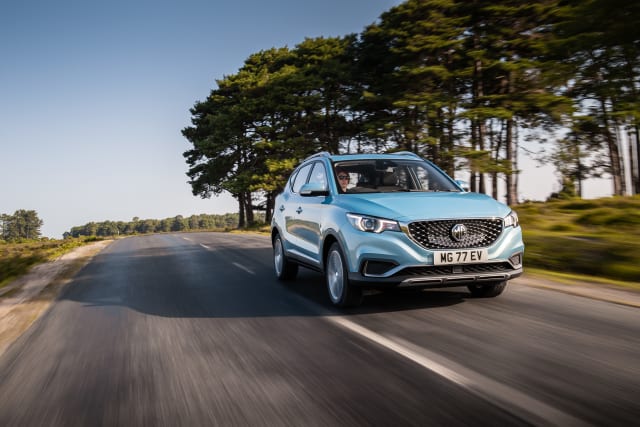 You’re looking at ‘the most high-tech MG ever’. For a certain crowd, that may not sound like the hugest accolade, but really it is.

This is the MG ZS EV, the firm’s first entry into the booming UK EV market. Sitting on the base of the ZS crossover introduced last year, it swaps out the arguably clunky internal combustion powertrains in favour of battery power. So far, the crossover has been a revelation for MG — but will the addition of plug-in power continue its charge? We find out…

As mentioned, the biggest change is here to switch from petrol power to electric — with a 44.5kWh battery linked to a 105kW motor featuring here.

To highlight its EV status, there has been a handful of visual tweaks to the ZS. Up front, a redesigned front grille features and acts as a cover for the charging socket — while also incorporating a badge that illuminates as the car is receiving charge. A fresh set of 17-inch alloy wheels come as part of the package too.

Rounding out the changes is a model-exclusive ‘Pimlico Blue’ paint scheme, but we’ll come to that…

That 44.5kWh battery and 105kW motor work together to produce 141bhp and 353Nm of torque, and the result is 0-60mph in 8.5 seconds with a top speed of 87mph possible. As for range, MG says the ZS EV can do 163 miles on the WLTP combined cycle — though with our very limited London test route, we’ll have to wait to get a real chance to test this claim.

The biggest compliment we can give to the ZS EV’s powertrain is that it’s very easy to not think about it when driving. Acceleration around town is good thanks to that instant torque, but there’s no sense you’re ever going to be able to — or particularly want to — drive it in a trouble-causing manner.

We should note our test route was restricted to a very limited distance of central London roads, so it remains to be seen how the ZS EV handles more open environments, but as far as a runaround for the capital goes it does the job perfectly.

Steering is comfortably on the light side which, when combined with the car’s short wheelbase, allows for easy movement of the car around tighter spots, while excellent all-round visibility makes life that little bit less stressful.

Three drive modes are available too — Eco, Normal, and Sport — with the foremost making a notable difference in optimising power delivery in an effort to maximum range. There is very little difference between the latter two, though, with both seemingly offering the full performance potential.

There’s no drastic revolution to the design of the ZS for its EV variant, but a handful of changes have come to distinguish the model from the rest of the range. Up front, a tweaked grille houses the charging port and features a ‘breathing’ badge that flashes when the car is on charge, while 17-inch alloys said to be inspired by windmills are introduced. ‘Pimlico Blue’ is also a striking addition to the car and suits its look well.

For us though, the visuals of the ZS continue to be uninspiring — almost feeling like a mashup of every other crossover on sale today rather than being a car that stands out on its own.

MG has opted to keep the interior of the ZS pretty similar to the base car too — though this is where its budget roots break through. Hard plastics are a dime a dozen, and some of the ‘premium-feel’ additions are quite the opposite to the touch.

It does feel quite spacious though, more so than electric (and similarly-priced) rivals in the Nissan Leaf and Renault Zoe. It packs more practicality than the two as well, offering 470 litres of boot space with all five seats in place — rising to 1,100 with the rear row folded flat.

Upgrading to Exclusive brings a leather interior, a panoramic sunroof, heated front seats, electrically-folding mirrors and a reversing camera. This is priced from £27,995 after the grant.

MG is hedging its bets on shifting the first 1,000 units with an offer that sees them knock the starting price down to £21,995 — with a home charger thrown in for good measure — for those who get an order in early enough.

We’ll have to wait until we can take the MG ZS EV outside of central London to come to a full judgement on it, but the early signs are good. It manages to create very little fuss about itself and the way it moves about and is definitely a step up over its petrol counterparts.

MG’s first 1,000 orders shouldn’t be too hard to shift with its impressive offer, with no EV delivering as much practicality and kit for that kind of money, but we suspect beyond that it will have to come up with some more aggressive pricing to make it a compelling alternative to overall higher quality EV rivals in the Nissan Leaf and Renault Zoe.