First drive: The facelifted Audi A4 remains as refined and premium as ever 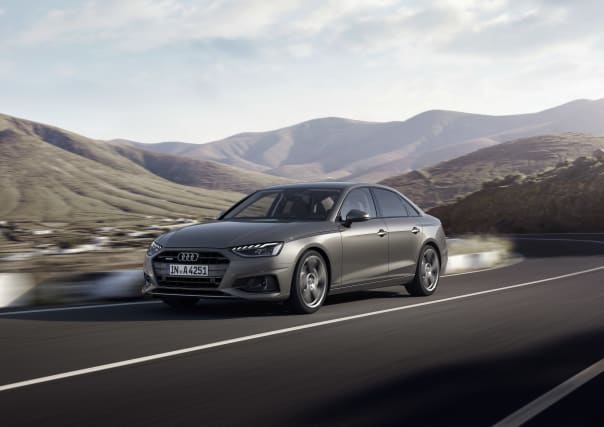 Little wonder then as to why this Audi receives the most updates and alterations. The German firm gave the A4 the subtlest of all changes in 2018 – bringing more standard equipment, trapezoid-shaped exhaust tips and larger wheels. And that’s about all.

But just a year later, here we have a proper facelift of the A4. This is an important refresh, given that the current A4 was unveiled back in 2015. Much has changed in the executive car class in that time, with all rivals updating their cars since then. So, can the updated A4 compete?

Audi has developed a bit of a reputation for its ‘blink and you’ll miss it’ approach to facelifts, and the same is arguably true here.

Inside it comes with a new 10.1-inch touchscreen that is much slicker than the previous car’s monitor. The excellent digital Virtual Cockpit is also now a standard feature – rather than a pricey extra like before.

And finally, the facelift introduces two new trim levels, which sit each side of the existing line-up. That means you have a new entry-level Technik grade sitting bellow the Sport, S line and Black Edition, and a Vorsprung grade acting as the new range topper.

The current cheapest engine is the one fitted to our test car – a turbocharged 187bhp 2.0-litre petrol unit. Power is sent to the front wheels via a seven-speed automatic gearbox – the latter a feature on every new A4.

The 187bhp petrol unit is a good match for the A4 – delivering smooth performance that never feels sluggish nor outlandish. A 0-60mph time of 7.1 seconds is possible, along with a top speed of 150mph.

One disappointment is the S tronic automatic gearbox, which is sometimes hesitant to transfer the power to the tarmac. As for running costs, Audi claims 42.2mpg is possible, along with CO2 emissions of 133g/km.

Elsewhere, there’s a 242bhp 2.0-litre petrol with all-wheel-drive, and a 2.0-litre diesel unit producing either 161bhp or 187bhp. Smaller and more affordable engines will join the A4 range later in the year.

As with the previous A4, this model feels at its best at a steady cruise. The refinement is top notch, with little road or wind noise making its way into the cabin. The 2.0-litre petrol engine is also impressively refined, while the 18-inch alloy wheels on our test car also help to provide a supple and comfortable ride.

But as with the pre-facelift A4, this German saloon still lacks the excitement and driver involvement of the BMW 3 Series. The steering offers very little feel, although it remains easy to place through sharp corners.

It stays planted to the tarmac, though, with little body roll being seen from our saloon test car, even without the quattro all-wheel-drive system.

Yet excitement isn’t the name of the game here – rather comfort and refinement shine through.

Audi certainly hasn’t gone overboard on this latest facelift – keeping the visual changes to a minimum.

Look at the latest A6 and A8 saloons, and it’s easy to see where the updated A4 drew its inspiration from. At the front and rear, new LED lights feature with their own signature, while elsewhere the A4 gains a larger Singleframe front grille and new trim detailing.

But the visual appeal hugely depends on trim level. Our silver test car with 18-inch alloy wheels looked unremarkable. However, switch to the higher-spec S line and Vorsprung models and these car’s larger alloy wheels and sportier bodykits help to transform the car into an S4 lookalike.

Audi interiors are usually the one element where the Ingolstadt brand’s cars stand out above the rest, and the changes made to the facelifted A4 have only built on that. It not only looks like a grade A-quality cabin, but it also feels that way with upmarket materials used throughout.

But undoubtedly the highlight of this facelift is the new 10.1-inch touchscreen, which is standard across the range. It uses the Volkswagen Group’s latest MIB 3 operating system, and offers a host of new connected features – such as parking information as you approach your destination. It also works seamlessly with a fully-digital Virtual Cockpit, with superb graphics used on both.

Cabin space is also generous, with plenty of room for adults to sit in the rear in both the Saloon and Avant (estate) – the latter offering a far more usefully-shaped boot.

Audi has made the A4 more appealing than ever thanks to a new entry-level Technik trim level and enhanced standard equipment. Basic features include the 10.1-inch touchscreen, the 12.3-inch Virtual Cockpit, LED headlights, heated front seats and a reversing camera. Technik models will be available shortly after launch, with prices starting from an affordable £30,750.

Sitting at the top of the range is the newly-introduced Vorsprung, which costs from a rather pricey £50,010. This ticks just about every box – Matrix LED headlights, a panoramic sunroof, adaptive sports suspension, a head-up display and a Bang & Olusfen sound system.

As a rule, it’s the cheaper A4s that make the most financial sense – particularly with the much-improved standard equipment levels.

The updated A4 continues to do what modern Audis are known for – class-leading interiors and excellent refinement. The new touchscreen and updated operating system moves the A4 into line with its key rivals from BMW and Mercedes, too – an area of improvement the last A4 needed to improve on.

The introduction of new more affordable engines and trim levels will also extend the A4’s appeal, and likely continue to ensure the A4 remains Audi’s best-selling model.

While the driving experience might be lacking the dynamic edge of the BMW 3 Series, and the automatic gearbox is far from perfect, the A4 is a seriously well-rounded car that now deservedly sits alongside the class best.