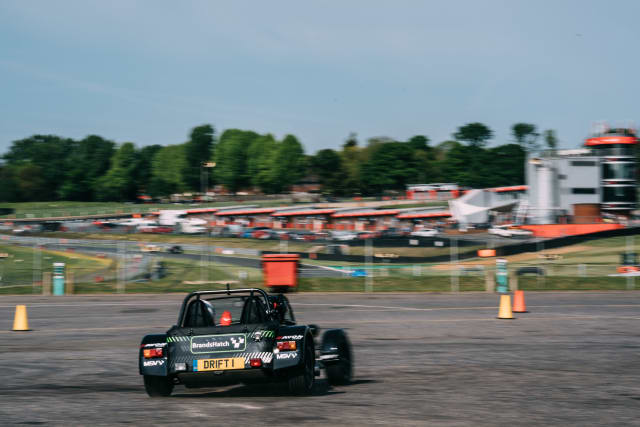 Going sideways in a car. It’s something that a lot of us have seen, be that on the internet (where many people are captured getting it horribly wrong) or even in the local empty supermarket car park.

But it’s something that isn’t advisable, nor really legal, out on the public road. The best place to learn about car control is always on private land with plenty of space, few things to hit and – most importantly – no one around.

The Caterham Seven, meanwhile, isn’t a car you’d usually associate with drifting. Though it has the go-to combination of being rear-wheel-drive and relatively highly-powered, it’s a car which is more focused on handling and grip rather than smoking tyres and hitting big angles.

The Caterham Drifting Experience, however, aims to go against that. It’s a new experience, created in partnership with MotorSport Vision (MSV) to give people the opportunity to go drifting in a Seven. And we’ve been given the chance to try it out before it goes live.

It’s being hosted at Brands Hatch, and though this may conjure up visions of attacking bends on the track – which is going to form part of the experience, albeit at additional cost – we’d be focussing on drift sections, which takes place in one of Brands’ large paddocks.

We’re shown to the cars and, to begin with, they appear to be like any old 270R model. Sure enough, they use the same 1.6-litre petrol engine with 135bhp as you’d find in the road-going Seven, but there have been some subtle changes made to them in order to better their ability to go sideways.

Chief among these are the tyres. Though the fronts are sticky, like you’d expect to find on any Caterham, the rears are effectively van tyres – and they’ve been pumped up to rock solid levels. It means that while the front of the car will generate plenty of traction, the rear will be free to slip around.

First, we’re let loose around a coned track with an instructor sat beside us. Immediately, the difference is noticeable and though we’re taking things slow to begin with, the car is eager to step out with the merest hint of throttle.

We’re given a few ‘settling’ loops of the circuit of cones, prodding the throttle and feeling the car begin to slide. It’s wonderfully progressive, and the Caterham’s dinky little steering wheel is easy to navigate. The finale of the loop is a doughnut – which you’d think would require you to mash the throttle to the floor and apply some steering angle.

But in reality that isn’t the case. There’s an initial, sharp snatch of throttle needed to unsettle the car, and then routine stabs of gas to ensure it keeps rotating, consistently adjusting the steering to keep it going in one, perfect circle. It’s a lot harder than it looks, but before long it’s all knitting together.

The instructor then clambers out of the Seven (exiting a Caterham has never been a graceful thing), and we’re given the chance to attack the course completely solo. It’s akin to the teacher stepping out of the class; all of a sudden you’re committing more throttle, taking corners at greater speeds and testing your bravery on each new loop of the track. Most of the time it all comes together, though on many occasions it doesn’t – in spectacular fashion, we’d add.

The organisers then announce that the course is being re-jigged. Rather than a simple single cone to doughnut around, there would be a figure of eight section to navigate. It means you have to enter the area sideways, rotate around the cone and allow the car to naturally pendulum in the opposite direction to travel in, predictably, a figure of eight.

Again, it’s a case of sounding easier than it is. The initial slip is fine – it’s just the same as the previous exercise – but tying it together in one, fluid figure of eight takes some practice. Thankfully we manage to avoid hitting the cones – and only once over-do a slide – and soon have an eight-shaped drift on the go. It’s addictive stuff; each time you come back in, you’re raring to have another crack at it.

The Seven itself is a breeze to control. Though the unassisted steering is a touch heavy to begin with, once up to speed it becomes second nature. The instant throttle response makes judging how much gas the car needs easy, and the brakes (though not all that needed) provide enough stopping power to quickly unsettle the car, and make it easier to slide.

We come to a halt, and before we know it the day has come to an end. Not only has it been huge amounts of fun, but it’s been informative too – the way a car reacts on the very limit of grip showcases so much about weight transfer and responses that it could improve the way you deal with driving in slippery conditions, or if you were to start sliding in an emergency situation.

This event isn’t something exclusive to journalists, either. It’s going to be a new experience offer located permanently at Brands Hatch. Each drift session costs £189 and consists of three hours of driving. For those looking for more of a challenge, there’s a track experience too. For £549, it gets you six sessions of 15 minutes, and is conducted alongside pre-existing track day events.