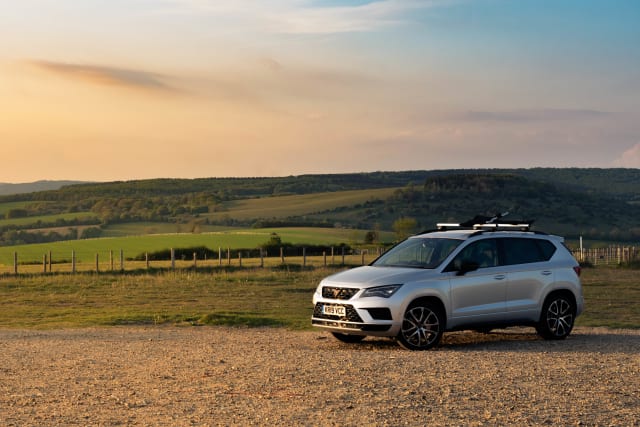 “Is that a Dodge?”, the petrol station cashier asked me the other day. I’m getting used to questions like this.

I’ve always been curious about how much the general public actually cares or even knows about the car industry. Us enthusiasts naturally notice badges and what they denote, but does Joe Bloggs, who bought their car because it was the right size and they liked the colour, care about the difference between a BMW 218 or 240? Or a Seat and a Cupra? Probably not.

So, when Seat decided to create a whole new ‘manufacturer’ from its Cupra performance division in an attempt to build its brand appeal I thought it was rather pointless. Most people wouldn’t notice, I told anyone who’d listen. (Which was no one.)

Turns out I was wrong. (Funny, that. It’s almost like the Spanish manufacturer would have spent months and many euros doing market research before making their decision.) We’ve recently taken delivery of KR19 VCC, a Cupra Ateca, which will be with us for the next six months, and I think I need to get my story straight.

Why? Because few cars I’ve driven have solicited more queries, as fellow shoppers and fuel pump attendees wonder what company that bronze tribal tattoo-esque badge represents. I generally stumble over my words, saying something like “it’s a Cupra, which is sort of a Seat, but not really… it’s like their performance car division but a separate company”, before awkwardly shuffling away leaving them none the wiser.

The identity crisis isn’t helped by the fact the brochure in the glovebox welcomes you to the Seat family, and the roof rack supplied with the vehicle bears both Seat and Skoda badges. Sharing really is caring in the VW Group.

However, these questions show badges and logos do work, and people are interested when they don’t recognise one, but with something relatively niche like this it might take a while for the Cupra tribe to stick in people’s minds.

So, for those curious folk, what are the specifics of this Cupra Ateca? If you know your VW Group hot hatches you’ll recognise the recipe for this go-faster crossover – a 2.0-litre turbocharged petrol engine making 296bhp and 400Nm of torque, fed to all four wheels through a seven-speed automatic transmission.

That combination makes it good for 0-60mph in five seconds and a top speed of 153mph. Those are highly impressive and wholly believable numbers, too – rotate the dial between the seats to Sport or Cupra mode and the Ateca comes alive. Flex your right ankle to the floor and its get up and go delights and surprises.

However, this might be VW’s hot hatch recipe, but it’s not a hatchback, it’s a crossover. A small SUV. It’s quite heavy and high-riding, then, and not physics-defying. Therefore, compare it to something like a VW Golf R and its responses aren’t quite so urgent; its corner hugging a little less confidence-inspiring.

I’ve really bonded with the Cupra Ateca, but I think I like it as a well-specced Seat Ateca, rather than for the pizzazz the bronze badging brings. I naturally tested its performance credentials a few times when it first arrived, but since then I just have no real inclination to spin that dial to anything other than comfort. I’ve never felt the urge to take the scenic route home to enjoy its hot side.

The highlights, then? The size is spot on – big enough to be usefully practical without ever feeling unwieldy around town – and the interior is more premium than the £35,915 price tag might suggest. The only optional extra on our car – at no extra cost – are the excellent black Alcantara sports seats.

Next month I have an early airport run scheduled in. I think I’ll nab the keys to the Cupra for a pre-dawn raid up my favourite country road to see if I can gel with the hot hatch heart of this high-riding crossover. If I can’t, it’s still a pleasurable thing for commuting duties, and with it returning about 33mpg, decently economical, too.Cupra Ateca