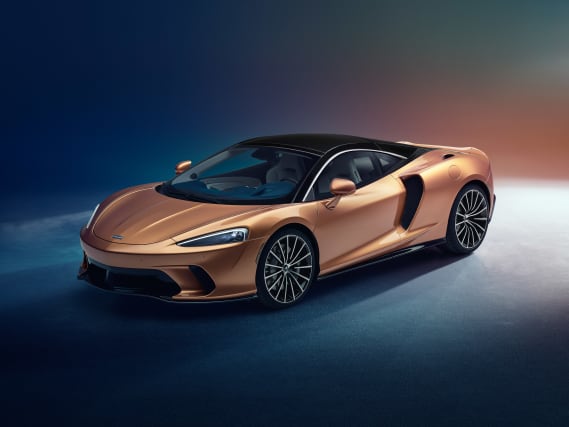 McLaren plans to open its range to a whole new audience with its new GT – a car that’s said to offer outstanding ride comfort and segment-leading cabin refinement.

It will be the first time McLaren has offered a true grand touring model, built with passenger comfort for long distance in mind.

To achieve this, the Woking-based manufacturer has adapted its existing platform and engine block to increase refinement and luggage capacity without affecting performance.

McLaren’s 4.0-litre, twin-turbocharged V8 is once again present, providing 612bhp and 630Nm of torque. However, it has been tweaked for the GT with a flatter torque curve that provides more linear acceleration. The zero to 60mph sprint takes just 3.1 seconds, while the top speed is 203mph.

To increase passenger comfort, a new damping control system has been incorporated into the lightweight aluminium suspension set-up. McLaren says it has also improved the suspension controls it first introduced on the 720S supercar, which uses sensors to read the road and predict imperfections before adjusting the suspension in anticipation of bumps. Meanwhile, softer engine mounts reduce vibrations through the cabin.

The interior has been overhauled, too. It might look similar to existing McLarens, but there are new seats that are heated with extra padding and back support. They’re available in Nappa leather as standard with luxury leather, Cashmere and Alcantara options available.

The carbon-fibre passenger cell has had a bespoke section fitted at the rear to incorporate a new luggage area that McLaren says can accommodate a bag of golf clubs or a pair of skis. When combined with the front ‘frunk’ – a boot where the engine would be in a traditional car – the GT has an impressive 570 litres of luggage capacity.

On the outside, the styling is unmistakably McLaren but toned down compared with recent efforts. It has been designed to evoke traditional GT imagery while retaining a function over form ethos, such as incorporating air intakes for the radiators into the flared rear haunches.

Mike Flewitt, CEO of McLaren Automotive, said: “The new McLaren GT combines competition levels of performance with continent-crossing capability, wrapped in a beautiful body and true to McLaren’s ethos of designing superlight cars with a clear weight advantage over rivals.

“In short, this is a car that redefines the notion of a grand tourer in a way that only a McLaren could.”

Order books are now open for the McLaren GT, with prices starting at £163,000. Deliveries are scheduled for late 2019.