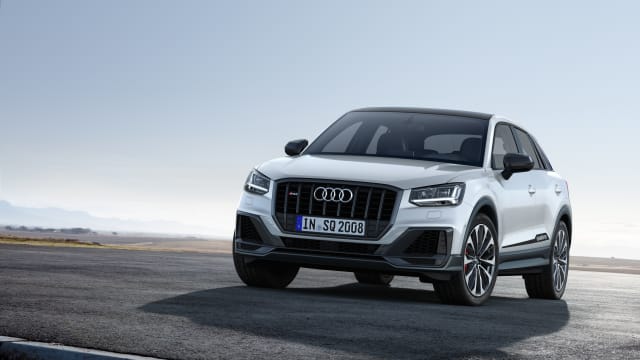 This is the Audi SQ2, the latest identikit, parts bin performance car from the Volkswagen Group. That’s an admittedly pessimistic way to start, but this go-faster crossover has an engine and platform we’re mighty familiar with, with everything from the Cupra Ateca to the Volkswagen Golf R sharing mechanicals. So, you’ll understand why it’s difficult to get too excited…

However, what makes the SQ2 quite interesting is that it does enter a rather under-served niche. If you’re looking for a sub-£40,000 performance SUV, the Cupra Ateca is about your only compelling option. The question is, can the SQ2 make a case for itself from behind the wheel, and not just on paper?

The SQ2 itself is a totally new model in Audi’s range, but as is so often the case with performance variants of Volkswagen Group products, it’s a combination of parts we’ve seen before. Still, it should be a hit, as if there’s one thing that’s sure to keep consumers happy in 2019 it’s a well-specced, go-faster version of a crossover.

Compared with a standard Q2, the S badge gets you a ride height 20mm lower, a stiffer suspension, and some sporty upgrades inside and out.

If you know your VW Group hot hatches you’ll know what to expect here. Yes, it’s the ubiquitous 300bhp 2.0-litre turbocharged four-cylinder engine you’ll find in everything from the Volkswagen Golf R to the Skoda Octavia vRS.

Fortunately, familiarity doesn’t breed contempt here. Sure, it’s not the most characterful engine, but there’s no denying its performance credentials. It has a boosty edge to it, offering a slight delay when you plant your foot before surging through revs. In the high-riding Q2 it’s quite exciting.

Driving the SQ2 is something of a double-edged sword, so let’s start with the positives – this car is quick. That 2.0-litre engine has impressive punch, giving the crossover the kind of performance you don’t expect from a high-riding family car. It’s also supremely grippy thanks to the four-wheel drive system, so it rarely struggles for grip.

However, the high centre of gravity does make the car a little unnerving in the twisties – you might have confidence it’ll stick, but you’ll be tossed from side to side in the cabin in the process. The SQ2 also suffers from the familiar Audi foible, which is a tentative gearbox. Leave it in auto and it’s easy to catch it out, with lethargic downshifts hampering progress. It’s quick and crisp if you take full control with the paddles, but you should be able to leave it to its own devices without having to wait full seconds for any response…

The standard Q2 is already quite the looker – Audi absolutely nailed the ‘honey I shrunk the SUV’ look, giving its crossover the chunky styling of its bigger Q models in a less intimidatingly huge package.

Naturally, then, giving the body work a little sporty nip and tuck only improves things, though the yellow paint and Quattro stickers on our test model could be considered a little gaudy. It does show the versatility of the design, though – those looking for an understated performance car could opt for a darker shade and easily fly under the radar, while those wanting to stand out for the crowd can pick a lairier paint job and eye-catching accessories.

Given the exquisitely modern, screen-laden interiors of the latest Audis, it’s easy to be a little underwhelmed when climbing aboard the SQ2, which still has the old-spec interior.

Fortunately, Audi has long been at the top of its cabin game, so there are plenty of decent materials throughout, and the excellent if now slightly outdated infotainment system, with its dashboard-mounted screen. Virtual cockpit is still a joy, with its heavily configurable screens and easy-to-read layout one of the best in the business.

As you’d expect from an Audi, the SQ2 is pretty well-specified, with DAB radio, sat nav, Bluetooth, and Apple CarPlay and Android Auto included as standard. There are also sports seats, which are comfortable if not particularly supportive, a flat-bottomed steering wheel and other subtle sporty touches.

One potential bug-bear for a circa-£40k Audi is that the aforementioned virtual cockpit and bigger infotainment screen are a £1,395 optional extra. Probably one that’s worth ticking, though.

The Audi SQ2 is a brilliantly capable car. It’s got the kind of performance to hold its own against many a hot hatch and gets all the premium trimmings you expect from a well-regarded brand like Audi. The only real frustration that crops up is the easily-confused gearbox.

However, those looking for a genuine performance car would probably be better suited to something like the almost-identical Audi S3, or one of the other VW Group hot hatches. The SQ2’s higher centre of gravity makes it feel a little less capable and confidence-inspiring in corners, though there’s no denying its ability to cover ground quickly.